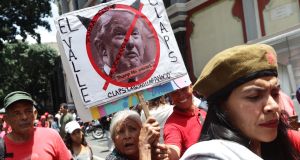 A chavist supporter holds a sign that reads “Out of Venezuela. Trump will not pass” during the “march for the peace and unity of the peoples” on July 27th in Caracas. Photograph: Rayner Pena/EPA

US president Donald Trump has announced a near total economic embargo on Venezuela in an effort to force president Nicolás Maduro out of office.

Mr Trump on Monday signed an executive order freezing all Venezuelan government assets in the US. It also bars foreign nationals from undertaking financial transactions with the regime as Washington dramatically ratchets up pressure on Mr Maduro.

The embargo marks the first time the US has taken such action against a western hemisphere government since 1988, when it imposed a similar measure on Panama.

A senior US official said John Bolton, the White House national security adviser, would speak about the embargo at a conference in Lima, Peru’s capital, on Tuesday.

In a speech, Mr Bolton is expected to say the order “freezes all of the Venezuelan government’s assets, and prohibits transactions with it, unless specifically exempted” and that it “authorises sanctions on foreign persons who provide support or goods or services to any designated person, including to the government of Venezuela”.

“We are taking this step to deny Maduro access to the global financial system, and to further isolate him internationally,” Mr Bolton will say, according to the US official.

The order will allow case-by-case exemptions under the new sanctions programme that could allow big companies, such as Chevron, to continue to operate in the country.

The executive order is the latest in a series of White House efforts to tighten the screws on the Maduro regime and pave the way for Juan Guaidó, the opposition leader, to come to power. The US had hoped its pressure campaign would bear more fruit more quickly, but Mr Maduro has managed to cling to power.

The push on Venezuela is one of several US “maximum pressure” campaigns around the world, including tough sanctions on Iran and North Korea, that are designed to change the behaviour of regimes – or in the case of Venezuela, the regime itself.

“With Venezuela . . . it’s gone on longer than most would have predicted,” said one senior US administration official.

Other US measures over the past two years have included cutting Venezuela’s access to most of the US financial system, freezing the assets of key Maduro regime officials, and targeting PDVSA, the national oil company. They also include banning transactions with the Venezuelan central bank and prohibiting oil and gold sales.

Further, in January the US stopped Caracas from exporting crude oil to the US and from importing diluents needed to process its heavy crude. That same month, the US recognised Mr Guaidó as the country’s interim president in a direct challenge to the Maduro regime.

The apparently co-ordinated move – which was joined by Brazil, Colombia and other Latin American countries – came as Mr Guaidó swore himself in at an ad hoc ceremony in Caracas, while opposition supporters staged mass rallies throughout the country.

The US has this year revoked more than 700 visas for those accused of backing the Venezuelan regime, including more than 100 diplomats, many of whom worked at the embassy in Washington.

Meanwhile, Caracas has remained in a political stalemate as a humanitarian crisis that will have seen 5m Venezuelans flee the country by the end of the year escalates.

The US says its actions are designed only to weaken and isolate the regime. But critics say the sanctions against the oil industry are affecting the population of Venezuela, including the poorest.

On Tuesday, Wilbur Ross, US commerce secretary, will join Mr Bolton at the Lima conference. He is expected to speak about plans for “the day after” – the recovery of Venezuela’s shattered economy in a post-Maduro age.

Some 60 delegations from around the world are due to attend the conference, which is being ignored by Mr Maduro’s key allies of Russia, China and Cuba. – Copyright The Financial Times Limited 2019