President tells Republicans he is ‘1,000 per cent’ behind immigration reform efforts

Children can be heard wailing and calling out for their parents in an audio recording purportedly captured from inside a US Customs and Border Protection detention facility and given to news organisation ProPublica. 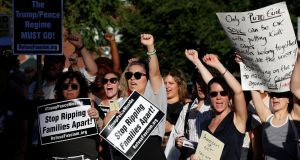 Donald Trump told Republicans he was “1,000 per cent” behind immigration reform efforts but did not offer a clear path forward as his administration faces condemnation for its practice of separating children from their parents at the border.

At a close-door meeting with House Republicans on Capitol Hill, Mr Trump expressed concern for the families being separated by the “zero-tolerance” policy, members said, but he did not take responsibility for the practice.

Instead the president urged the Republicans in the room to pass legislation that keeps families together.

“The president does want this to end,” Congressman Carlos Curbelo, a centrist Republican from Florida who has led the charge for immigration reform, said after the meeting.

Mr Curbelo said Mr Trump told members his daughter, Ivanka, had appealed to him to stop separating families at the border.

Unbowed by mounting public anger from lawmakers, religious leaders, human rights advocates and business executives, Mr Trump and top administration officials have fiercely defended the policy, which has led to the separation of more than 2,300 children from their parents in five weeks.

That anger was captured by a protester, who shouted at Mr Trump as he walked through the Capitol before the meeting on Tuesday evening. “Mr President, f**k you,” she yelled across the marbled rotunda.

As Mr Trump left the session with Republicans, he faced a rare protest by members of Congress. The group of House Democrats shouted at the president to abandon his controversial immigration policy while waving signs that read: “Families Belong together”.

House Republicans - barreling toward a vote on a pair of immigration bills - were hoping the president would rally skeptical members of the caucus around a proposal that sought common ground between moderates and conservatives on an issue that has fiercely divided the party.

But instead Mr Trump said he would sign either proposal that came to his desk, members said.

“He said we need to pass one of the two bills,” Congressman Kevin Yoder, a Republican of Kansas, said after the meeting. He added the president was “agnostic” about which of the two measures they should pass.

During his remarks, which were expected to focus on immigration, Trump spoke about his recent visit to North Korea and his trade policy, members said. He also openly mocked the Republican congressman Mark Sanford, a conservative critic of the president who lost his primary this month after Trump endorsed his opponent, they said.