A record number of Afghan nationals have entered Turkey this year 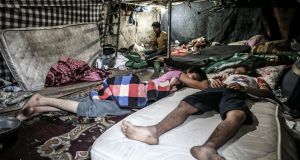 A Pakistani and Afghan immigrants living in Turkey in harsh conditions, many working in the waste paper collection business. Photograph: Ozcan Soysal/NurPhoto via Getty Images

Surrounded by her children and mother-in-law in an unfurnished apartment in eastern Turkey, Hakima tells of a traumatic recent few months.

She and her family arrived here in the city of Van from Afghanistan in April, leaving the day before the Taliban launched its annual spring offensive. They are from Yakawlang district in Bamyan province, the scene of several Taliban massacres of ethnic Hazara, the group to which Hakima and her family belong. When the Taliban moved into the area the family fled.

“We left because of the war. Life was getting more and more difficult,” she says. “Living in Afghanistan now is worse than during the war, when the foreign troops were fighting the Taliban.”

As ethnic Shia, the Taliban and, increasingly, Islamic State have set out to target Hazara communities. In 2015, Isis-affiliated militants beheaded seven Hazara civilians in southern Afghanistan including a nine-year-old girl, sparking huge protests. Here in Van, a majority Kurdish city 80km from the Iranian border, Hakima’s husband is now the sole breadwinner for the family, working at a waste sorting facility that sees him earn 35 liras (€6.40) a day.

Since the EU and Turkey penned a controversial deal to curb the flow of refugees and migrants into Greece in March 2016, the numbers attempting to reach Europe have fallen sharply. But at the distant fringes of the so-called migrant trail to Europe, desperate people are on the move once more. A record number of Afghan nationals have entered Turkey this year, fuelling a 400 per cent increase on the same period last year.

The upsurge partly explains why the UNHCR’s Middle East chief Amin Awad warned in April that Europe faces a second “exodus” of refugees unless donation targets for conflict-afflicted countries in the Middle East are met.

As such, with tens of thousands of Afghans, Syrians and Iraqis again streaming into Turkey and Greece, the immigration debate that has divided Europe since 2015 may bubble up again. A report by Carnegie Europe, an arm of the global think tank, claimed in April that: “The lack of movement on reforms ultimately means that the EU remains woefully unprepared for another refugee crisis. And, unfortunately, there are numerous possible events that could trigger another massive wave of migration.”

One such “event” is the resurgence of the Taliban. At the beginning of the year, they were found to be active in 70 per cent of Afghanistan. On top of that, Pakistan is asking many among the more than two million Afghan refugees living there to leave by the end of June.

These events have conspired to fuel a surge in the number of refugees heading west, resulting in more nationals from Afghanistan and Pakistan entering Turkey this year than Syrians. This has prompted Ankara to begin building a wall on its border with Iran that’s set to be completed next year.

As a result of the surge, smugglers have descended on eastern Turkey, sometimes with tragic consequences. In late March, 17 migrants from Afghanistan, Iran and Pakistan who were being rushed to a city known for smuggling migrants, died when the overcrowded minibus they were travelling in crashed in Igdir province.

Turkey shares a 500km border with Iran, much of which is rugged, mountainous terrain, and migrants crossing illegally at night are endangered further by the potential for clashes between Turkish forces and separatist Kurdish militias hiding out in the borderlands.

While Hakima’s family has secured official identity cards that would, in theory, protect them from deportation in the event of increasingly commonplace police raids, Turkey is sending more Afghans back to Kabul, albeit in some cases without the Afghan authorities’ agreement.

And while threats to their lives are no longer a worry, Hakima, her family and thousands more are finding out that living in Turkey is an ongoing struggle.

“We have money problems. We can’t think about trying to reach Germany or Sweden – getting here was difficult and expensive enough,” Hakima says when asked if she would like to one day resettle her family in Europe. Their three-room apartment is unfurnished and layers of cardboard line the floor.

Meanwhile, 1,700km west of Van on the southern borders of the EU, Greece recorded a 17 per cent increase in illegal entries from Turkey in the five weeks to May 1st.

Authorities and aid agencies at refugee camps on the Aegean islands of Chios and Lesbos are struggling to cope with the fallout from Turkey’s military operation in northern Syria this spring that forced thousands of Kurds and others from the city of Afrin and surrounding villages.

The number of sea landings on the Greek islands is down on previous years, but clashes between Arab and Kurdish occupants at a camp on Lesbos last month led to serious injuries and hundreds of refugees leaving the facility.

For these migrants and refugees, unable to move forward but unwilling to return to the war zones they’ve fled, the prospect of a better life is dim.