The room where Michael Dwyer died

More than five years after he was shot dead by police, Irishman’s mother and sister visit Bolivia to find out more about how and why he died 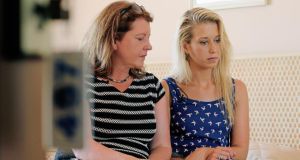 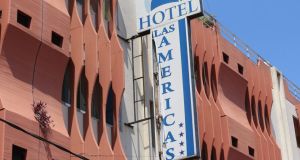 They wore summer dresses and sandals, and you could at first glance have mistaken them for a mother and daughter off on a girls’ holiday together. But for Caroline and Aisling Dwyer their visit this week to the Bolivian city of Santa Cruz was one they must have long dreaded.

It was in this ramshackle boom town on the edge of Bolivia’s hot eastern lowlands that Caroline’s son and Aisling’s brother Michael was shot dead by police on April 16th, 2009, along with two other men. Now, more than five years later, the family’s campaign for justice has brought them here.

After a long layover in Madrid and an 11-hour overnight flight, they barely had time to freshen up after their arrival last Sunday morning before they headed to Hotel Las Americas, where Michael had been staying when he was killed.

When they entered room 457, mother and daughter shared a private moment, sitting together on the bed where he had spent the last night of his life. Although the room was recognisable from photographs they had seen of it, they couldn’t believe how small it was. They couldn’t believe, either, that from this cramped space anyone fought off a heavily armed elite police unit for half an hour, as claimed by the Bolivian authorities.

The Dwyers never believed the official version, and in the intervening years they have amassed evidence that they say proves Michael was executed rather than having died, as the Bolivians claimed, in a shoot-out. Their quest for the truth has taken them from their home, in Tipperary, to the EU parliament in Brussels, the UN human-rights commission in Geneva and now Bolivia itself in pursuit of a full international inquiry into his death.

Caroline is the public face of the campaign. As well as trying to deal with her own grief she has helped other family members through theirs, while working full time as a scientist at a pharmaceutical plant.

A self-described private and apolitical woman, she is driven by a deep sense of injustice. Not only did the Dwyers lose a son and brother – a calamity in any family’s life – but they also had to endure the trauma of photographs of his bloodied, near-naked body being splashed across the world’s media. Most of those media readily bought the Bolivian government’s line that Dwyer was a right-wing mercenary out to kill Evo Morales, the country’s first indigenous president, and stir up separatist violence in Santa Cruz.

There have been moments in the past week when her antipathy towards the country softened, when individual Bolivians come up and apologised for her son’s killing. But there were unpleasant encounters too. On Monday she and Aisling returned to Hotel Las Americas to walk through the forensic and ballistic evidence they have gathered over the years, only to be told by hotel staff that after the Dwyers had left the previous day, police had arrived asking for them. “I was never more scared in my life,” says Caroline.

Her anxiety increased later on Monday when she and Aisling visited the courtroom in Santa Cruz where Elod Toaso and Mario Tadic, the men arrested in the hotel raid that killed her son, are on trial. There she became the focus of a scrum of local media who, while covering Bolivia’s so-called trial of the century, are able to mingle freely in the courtroom with defendants, lawyers, relatives and the public. In the midst of this chaos the Irish women tried to have a private meeting with the last people to see Michael alive.

Toaso and Tadic stand accused along with 37 Bolivians, most linked to the country’s opposition, of terrorism. The courtroom is a swirl of competing conspiracies, most centred around Eduardo Rozsa-Flores, the Bolivian man they, Michael Dwyer and a Hungarian, Arpad Magyarosi, were working for.

Toaso and Tadic describe him as a complex figure with numerous business plans. But to some of their coaccused he was an agent provocateur, working for the government to create the illusion that Santa Cruz’s resistance to Morales’s rule had turned subversive. They believe he was betrayed by his government handlers and killed along with Dwyer and Magyarosi.

Although she says she raised her four children to be responsible for their actions, Caroline Dwyer does not believe her son would have been aware of any conspiracies that in retrospect were clearly swirling around him. “I don’t think at any time Michael realised there was anything wrong,” she says.

In Santa Cruz today everyone has an opinion about who Rozsa-Flores was working for or thought he was working for, and how much of this he communicated to the crew of Europeans he had gathered around him.

For the Dwyer family these questions have all too often diverted attention from the case’s central issue. Bolivia has no death penalty, and a disturbing weight of the evidence points to the summary execution of their son and the two others by its security forces as part of a government conspiracy to wreck the country’s political opposition.

If such a plan existed it has been an almost perfect success. The raid and ongoing trial has brought the once powerful Santa Cruz opposition to President Morales to heel. Rozsa-Flores, one of the few people who could say whether they had been framed by the authorities or were enticed by him into some subversive activity, is dead.

The elite in Santa Cruz understood the message sent to it in April 2009, and most have since made their peace with President Morales on his terms: they are free to continue making money but must no longer challenge his political hegemony.

Bu the authorities have left a paper trail that contradicts claims made by Morales and other senior officials about the events leading up to Dwyer’s death, and witnesses have rubbished the official version of a shootout.

A steady stream of leaked videos has suggested tampering with – and invention of – evidence to prop up the claim of a shoot-out.

Then came statements from officials publicly repenting their roles in the Rozsa-Flores case. Marcelo Soza, the public prosecutor in charge of the case for four years, fled to Brazil. Boris Villegas, a senior interior ministry official, is now himself in jail in Bolivia. Their declarations have corroborated existing evidence of a conspiracy orchestrated from the top of the Bolivian state. Villegas’s lawyer says his client’s life is in grave danger.

Nevertheless, the government has ordered the trial to proceed. The result is that what is under way in Santa Cruz’s Palace of Justice is nothing more than a show trial.

Bolivia is seeking Soza’s extradition from Brazil for wrongdoing but is happy to proceed with the case he built and has since disowned. It has also been revealed that two of the four judges who will deliver the verdict have relatives who have been given government jobs since they were appointed to the trial.

The prosecutor placed in charge of the case after his predecessor fled has been officially denounced for involvement in torture and covering up murder in previous cases but nonetheless works with the head judge to produce legal reasons to prevent the defence lawyers questioning Villegas about the real author of the Rozsa-Flores affair.

The Bolivian authorities and EU diplomats have told the Dwyers this trial must be completed before any international inquiry can take place. The process has already lasted more than five years and shows no signs of ending anytime soon.

Rather than bring any closure for the family, this week’s visit has only opened up more issues. Despite the passage of time people reached out to them during the week to provide more information about their son’s death. In a public statement before returning to Ireland, Caroline Dwyer told the Bolivian media that her family’s quest for justice would go on.

There was only one comfort. “I had to see where Michael died,” his mother says. “Now at least I can finally bring him home.”