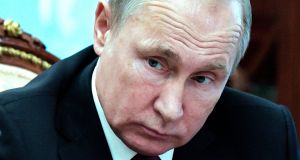 The collapse of a major cold war-era missile treaty is sending a shiver through European countries that fear being caught in the middle of a new US-Russia arms race.

A day after Washington halted its involvement in the 1987 Intermediate-Range Nuclear Forces Treaty (INF), Russia announced on Saturday that it was doing the same and would develop new missiles in response to perceived threats from the US.

European states urged the two nuclear powers to hold talks to resolve their dispute during the six months the US has given Russia to end its alleged non-compliance with the treaty, but Russian president Vladimir Putin offered no concessions and ordered his officials not to initiate any negotiations.

The US and its Nato allies claim Russia’s new 9M729 ground-launched cruise missile falls within the 500-5,500km range that is banned by the treaty, and would allow Moscow’s forces to strike major cities and strategic sites across Europe.

The Kremlin insists the weapon’s range is just 480km and accuses the US of breaching the pact by stationing rockets in Romania and preparing to deploy them in Poland. The West says these interceptors are elements of a European missile-defence shield but Russia believes they could also be used to attack targets on its territory.

Analysts say the INF treaty has also frayed because it fails to tackle China’s development of mid-range missiles, but in Europe its demise has stirred memories of the cold war, when US Pershing and Soviet SS-20 missiles pointed at cities on either side of the Iron Curtain.

“What we definitely don’t want to see is our continent going back to being a battlefield or a place where other superpowers confront themselves. This belongs to a faraway history,” EU foreign policy chief Federica Mogherini said in Romania.

Nato secretary-general Jens Stoltenberg, meanwhile, urged Russia to return to compliance with the INF pact and warned that Moscow’s new missile “can reach most of Europe, and that’s exactly why European allies are so extremely concerned”.

“These new missiles are mobile, hard to detect, nuclear-capable, can reach European cities and they have hardly any warning time at all so they reduce the threshold for any potential use of nuclear weapons in a conflict,” he told the BBC.

In central European states that joined Nato after the collapse of the Soviet Union, top officials also blamed Moscow for breaching the treaty, amid fears that a new arms race could put their region back in the crosshairs.

Polish foreign minister Jacek Czaputowicz denied telling German media that US nuclear missiles should be redeployed to Europe and insisted he did not want his country to host such weapons; at the same time, he “did not exclude the possibility that in the future nuclear arms will guarantee peace in our part of the world”.

Hungary – an EU and Nato member that has maintained good ties with Russia – called for “more pragmatic co-operation between East and West.”

Budapest’s foreign minister, Peter Szijjarto, said that “whenever there was a conflict between East and West, we central Europeans always lost”.