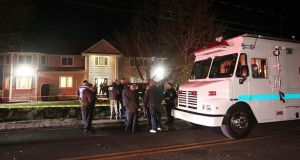 Police at the scene of a residence in Monsey, New York, after a December 28th stabbing during a Hanukkah celebration. Photograph: Seth Harrison/The Journal News via AP

The man accused of stabbing at least five people with a machete at the home of a Hasidic rabbi during a Hanukkah celebration could face a death penalty trial if one of his alleged victims, still in a coma, dies, a judge said on Monday.

Grafton Thomas (37) appeared in a White Plains, New York, court where he pleaded not guilty to federal hate crimes for the December 28th stabbing of members of the Orthodox Jewish community in Monsey, New York, bringing the number of federal charges he faces to 10.

Each count carries a maximum prison term of life.

He could need a capital defence team if any of the victims die, said US District Judge Cathy Seibel. One of those attacked, a 72-year-old man who suffered devastating machete blows to his head, arm and neck, is comatose and may not recover, according to his family.

Thomas spoke only briefly in answers to the judge’s questions, confirming his name and age and saying that he has taken the drug Prozac.

His attorney, Michael Sussman, said a psychiatric evaluation was being conducted and that he expected to submit a report on his client’s competence to stand trial by the end of the month.

“There are significant cognition process and comprehension issues,” Sussman told reporters outside the court.

Federal prosecutors have said Thomas targeted his victims because of their Jewish faith. In a criminal complaint filed last month, they cited journals seized from the suspect’s home containing references to Adolf Hitler, Nazi culture and the Black Hebrew Israelites movement, identified by extremism experts as an anti-Jewish hate group.

Assistant US attorney Michael Krouse said at the hearing that investigators recovered two machetes and two knives from separate vehicles.

The Monsey attack capped a string of incidents in which Jews have been physically attacked or accosted in the New York metropolitan area in recent weeks, including a shooting at a kosher supermarket in New Jersey that left two members of the Hasidic community dead.

One of the suspects in that attack – who died in the shooting – had also expressed interest in the Black Hebrew Israelites.

The most recent national numbers from the Anti-Defamation League’s Center on Extremism found 780 anti-Semitic incidents reported to or detected by the organisation in the United States in the first half of 2019, compared with 785 incidents reported for the same period in 2018. – Reuters