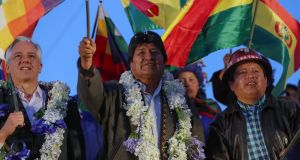 The Organisation of American States (OAS) has started an audit of the disputed presidential election that sparked a wave of protests across Bolivia in which at least two people died.

A 30-member OAS team was dispatched to the Andean nation after an agreement was reached on Wednesday between the regional body and the government of President Evo Morales. He was declared the winner of the October 20th poll after a tortuous count which the opposition denounced as a fraud after it was mysteriously suspended for 24 hours.

Before the suspension, opposition leader Carlos Mesa was on course to force a second round against Mr Morales, who is seeking a fourth consecutive term. But after the count restarted results showed the president holding a 10-point lead, enough under Bolivia’s system to be declared the outright winner on the first round.

That sparked the opposition’s claims of fraud, the calling of a national strike and the erection of roadblocks in many regions as well as violent clashes between government and opposition supporters.

By agreeing to the audit, and to abide by its conclusion even if this includes an instruction to hold a second round, Mr Morales made a significant concession. The OAS had already expressed concern about the integrity of the count after its mysterious suspension by the country’s electoral court.

The regional body also characterised the election campaign as unfair due to state institutions being used to boost the campaign of Mr Morales’s Movement Towards Socialism (MAS) party.

But a meeting on Thursday of Bolivia’s influential conference of Catholic bishops questioned whether the OAS had the means to carry out an “integral” audit while the opposition dismissed it entirely, saying it had not been consulted. Instead Mr Mesa reiterated his demand that the country immediately move to hold a second run-off round.

Seven of Bolivia’s nine departments were due to hold open civic assemblies on Thursday night to demand the annulment of Mr Morales’s victory. Mr Mesa blamed MAS supporters for the killing of two people on Wednesday in the town of Montero and called on the president to order an end to counterdemonstrations by his supporters.

After almost 14 years in power, opposition to him and the MAS has grown, especially since he refused to accept the result of a 2016 referendum, which rejected his demand to be allowed to run for a fourth consecutive term. The country’s constitutional court, which is dominated by MAS picks, dismissed the result by ruling that term limits violated the president’s human rights.

Bolivia is just the latest South American country to be hit by unrest, following violent protests in Ecuador and Chile. Ongoing disturbances in Chile have forced its government to cancel two international summits it was due to host in the capital Santiago this month.

At least 19 people have died in protests there that were sparked by a hike in bus fares before transforming into an broader uprising against entrenched social inequality.