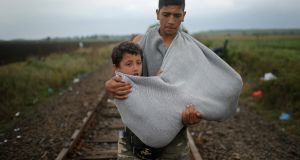 A youth carries a young boy as migrants walk towards waiting buses at the Hungarian border with Serbia on September 11th, 2015, in Roszke. Photograph: Christopher Furlong/Getty

Hungary, Poland and the Czech Republic broke EU law in refusing to provide a home for their share of migrants landing on the shores of Italy and Greece in 2015, the EU court has been advised.

The advocate general of the Court of Justice of the European Union, Eleanor Sharpston, in response to a case lodged by the European Commission, has urged the court to find against three member states that defied a mandatory decision by EU leaders to share the burden of the refugee influx by distributing refugees through the member states on a basis related to their size.

The opinions of the advocate general are not binding on the court but more often than not it follows their advice. The court is expected to rule in a few months.

The refusal by the three states to accept mandatory quotas had effectively stymied attempts by the EU to organise burden-sharing of refugees to ease the plight of frontline states – although EU rules allow for majority voting on the issue, EU leaders have been reluctant to impose new quotas in the face of the open defiance of the rules by Poland, Hungary and the Czech Republic.

Reform of the asylum system and the so-called Dublin regulation, requiring member states where refugees arrive first to handle them and, if necessary, send them home, has similarly been blocked.

If the opinion is confirmed by the court, that political reality is unlikely to change, although the three may face fines.

In response to the migration crisis in the summer of 2015, EU leaders adopted two decisions to help Italy and Greece deal with the massive inflow. These put in place detailed arrangements for the relocation of – respectively – 40,000 and 120,000 applicants for international protection.

A challenge by Slovakia and Hungary to the legality of one of those decisions was unsuccessful.

Ms Sharpston argues that claims from the three that their obligations were invalidated by responsibilities to the maintenance of domestic law and order, and the safeguarding of internal security, were not justifiable in law.

It was perfectly possible, she says, for the three defendants to preserve the safety and welfare of their citizens by refusing to take applicant X if they are seen as an individual threat without refusing all resettlements.

Moreover, the member states’ legitimate interest in preserving social and cultural cohesion may be safeguarded effectively by other and less restrictive means than a unilateral and complete refusal to fulfil their obligations under EU law, the advocate general argues.

She underlines that the respect for the rule of law implies compliance with one’s legal obligations. Disregarding those obligations because, in a particular instance, they are unwelcome or unpopular is a dangerous first step towards the breakdown of the orderly and structured society governed by the rule of law.

Finally, she notes that the principle of solidarity necessarily sometimes implies accepting burden-sharing.

Failure by the three to rectify their defiance of treaty obligations could in theory lead to financial penalties, although the court may rule that the issue is now moot as there are no ongoing demands for resettlements.

Rescuers rush to save hundreds of stranded pilot whales in Australia 08:27
Trump to name US supreme court justice successor by Saturday 06:47
Trump sanctions against Iran to be followed by warning at UN 01:00
Bars and restaurants in England to close at 10pm under new restrictions 22:36
Karen Bradley says she regrets the ‘hurt’ she caused while NI secretary 21:43