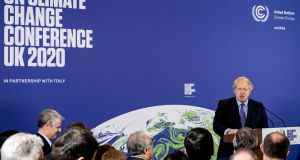 Boris Johnson launching COP26 at an event in London on February 4th. The conference will no longer take place in Glasgow in November. Photograph: Chris J Ratcliffe/POOL/AFP via Getty Images

Governments, environmental organisations and aid organisations across the world have accepted that the decision to postpone the annual UN climate talks was understandable given Covid-19. The talks were due to be hosted by the UK government in Glasgow next November.

Many indicated hope that postponing the gathering, usually attended by more than 25,000 people, will buy governments time to prepare a more successful outcome than might be possible in the face of a pandemic.

The COP26 conference was put back as lockdowns around the world were making it difficult to hold talks leading up to the event.

The postponement is another setback for global efforts to tackle the climate crisis after last year’s conference in Madrid ended without agreement. The only positive is that carbon emissions and air pollution have declined dramatically – albeit likely temporarily – as so many economies are put in sleep mode.

This year, however, countries were due to present updated and more ambitious greenhouse gas (GHG) reductions since the 2015 Paris Agreement.

The UK government indicated on Wednesday that COP26 was likely to be staged in mid-2021. The venue, Glasgow’s SEC arena, is being turned into a field hospital to treat virus victims.

“The EU is already torn between its climate ambition and the immediate need to mitigate the crisis, with the latter being the priority for many states,” said Lidia Wojtal, a Berlin-based climate expert.

“Postponement of COP26 may lower the expectations to quickly review EU’s 2030 target, especially that it is not likely that other countries will move forward any time soon,” she said.

EU climate chief Frans Timmermans insisted there would be no rowing back on Europe’s plan to become the first carbon-neutral continent: “As for the European Commission, we will not slow down our work domestically or internationally to prepare for an ambitious COP26, when it takes place.”

“The work that the commission is doing to present by September 2020 an impact-assessed plan to raise the EU’s 2030 ambitions and cut GHGemissions by 50 to 55 per cent compared to 1990 levels is on track, and the commission will stick to that,” the commission vice-president added.

Mohamed Adow, director of think tank Power Shift Africa, said postponement was a sensible step but postponing UN climate meetings did not mean postponing climate action. “Country delegations should use this extra time to ensure the economic response to Covid-19 doesn’t entrench the climate crisis, but instead accelerates the transition to a zero-carbon world.”

Before the pandemic countries were failing to deliver quick enough emissions reductions and support for the vulnerable. “This delay, combined with the economic recovery investment being devised, gives leaders the opportunity to revise their climate plans,” he said.

“Economies in the rich north must not be kickstarted with dirty investment that will lead to climate suffering in the global south,” Mr Adow said.

Climate Action Network Europe director Wendel Trio acknowledged the immediate task was to focus on buffering people and economies from the pandemic. “Climate change has dramatic costs that will keep rising if we delay further transformations needed to build sustainable, climate-resilient economies. The necessary postponement does not mean we can postpone tackling the climate crisis.”

Economic recovery packages should take the climate crisis into account, and ensure the needed transition to a safer society happened, he added. “This will allow all countries to commit to substantially increase their GHG emissions reduction targets for 2030 still this year, as required by the Paris Agreement. This is imperative to protect us all from future shocks.”

Earlier this week former UN climate change envoy Mary Robinson and International Science Council director Daya Reddy said: “The Covid-19 threat has shown governments can act swiftly and resolutely in a crisis, and that people are ready to change their behaviour for the good of humanity. The world must now urgently adopt the same approach to the existential challenge of climate change.”

In an opinion piece published by Project Syndicate, they added: “The world also faces an unprecedented climate and environmental emergency. Governments and businesses must now start addressing climate change with the same resolve and urgency that they are showing in fighting the pandemic . . . COP26 will be a make-or-break moment that tells us whether we can avert a global climate disaster.” – Additional reporting Bloomberg