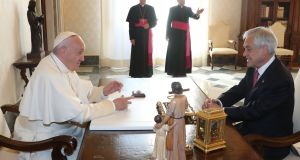 Pope Francis has defrocked two Chilean bishops who have been caught up in the country’s widening sexual abuse crisis, the Vatican said on Saturday.

A Vatican statement in Spanish said the pope’s decision was definitive and not open to appeal. It referred to a part of Canon (church) law related to the crime of sexual abuse of minors.

Defrocking, officially called “reduced to the lay state”, means they have been expelled from the priesthood. It is the harshest punishment the church can inflict on a member of the clergy and such action has rarely been taken against bishops.

Last month, the pope defrocked Fernando Karadima, an 88-year-old Chilean priest who was accused of sexually abusing teenage boys over a period of many years.

Chile has been hit by one of the worst sexual abuse crises in the Catholic Church, a scandal that prompted all of the country’s 34 bishops to offer their resignation to the pope last May. He has so far accepted seven.

Mr Cox and Mr Órdenes were not among the 34 because, although they still had the clerical rank of bishop before Saturday, they were no longer running dioceses.

The Vatican’s announcement come shortly after the pope held talks in the Vatican with Chilean president Sebastián Pinera and discussed the country’s sex abuse crisis.

“We shared the hope that the church may experience a renaissance and recuperate the affection, the closeness of the people of God, and can continue playing the important role that the church plays in our country,” Mr Pinera later told reporters.

Earlier this month, the religious order to which Mr Cox belongs, the Schoenstatt Fathers, said the Vatican was investigating an accusation against him relating to the sexual abuse of a minor in Germany in 2004.

Mr Cox, who is believed to have returned to Germany after a period in Chile, could not be reached for comment.

According to Chilean media, Mr Órdenes, who resigned as bishop of Iquique in 2012 while under Vatican investigation, was accused of molesting an underage altar boy years ago.

He is believed to be living somewhere in Chile. It was not immediately possible to reach him for comment.

During a trip to Chile in January, the pope strongly defended one of the 34 bishops who later resigned.

But days after returning to Rome, the pope, citing new information, sent sexual abuse investigator Archbishop Charles Scicluna of Malta to Chile to speak to victims, witnesses and other church members.

Archbishop Scicluna produced a 2,300-page report accusing Chile’s bishops of “grave negligence” in investigating the allegations and said evidence of sex crimes had been destroyed. – Reuters