British prime minister Theresa May has signalled she would consider extending a so-called transition period “for a matter of months” after Britain leaves the European Union. Video: EU Council 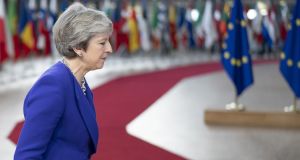 Theresa May arrives for a European Union leaders summit in Brussels on Thursday. Photographer: Jasper Juinen/Bloomberg 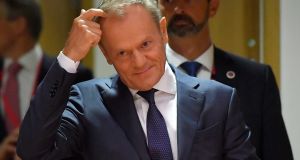 European Council President Donald Tusk said that he was sure EU leaders would respond positively to any request from Britain for a longer transition period after Brexit.

Speaking to reporters after a summit on Thursday, Tusk said the issue of lengthening the transition from 21 months had not been discussed by leaders but noted that British Prime Minister Theresa May had originally spoken of a transition of about two years. Earlier, May said she was open to extending the transition by a few months.

Live udpates of the meeting of EU leaders in Brussels

While EU Governments understand the challenges Mrs May faces in her party and parliament, senior sources say that the EU cannot have its red lines defined by Mrs May’s domestic difficulties.

The German chancellor Angela Merkel is reported to have told a dinner at the three-day European Council summit last night that just because Mrs May faced problems at home, it was not a reason for the EU to amend its negotiating position.

A senior Irish source said: “We can’t get involved in the nitty-gritty of British politics.”

Although EU officials said that the leaders did not discuss the position in London at last night’s dinner, The Irish Times understands that the subject was broached by some of the leaders present. One source said there was sympathy for May but also concern about her ability to make agreement made in Brussels stick in London.

During the transition period after the UK leaves the EU in March 2019 it will continue to operate under European Union trading rules. The transition will only be in place in the event of a withdrawal agreement being in place. The so-called backstop arrangement which commits to the maintaining of an open Border in Ireland, would come into effect in the event of a no-deal Brexit.

Mrs May initially suggested an “implementation period” of around two years after Brexit, to give the UK’s authorities and companies time to prepare for new arrangements, but later accepted a 21-month transition ending on the last day of 2020.

It emerged on Wednesday that EU chief Brexit negotiator Michel Barnier is ready to discuss a further year’s extension to allow time to find a solution to keep the Irish Border open.

Leaders of the 27 remaining EU states ditched proposals for a special Brexit summit in November, after Mr Barnier told them he needed “much more time” to find a way to avoid a hard Border in Ireland.

This week’s summit had been billed as “the moment of truth” when agreement is needed to allow time for ratification in the Westminster and European parliaments. But Mrs May has not come forward with the new “concrete proposals” demanded by European Council president Donald Tusk, instead telling fellow leaders that “courage, trust and leadership” are needed on both sides to find a solution.

The prospect of an extra year of transition is widely expected to form part of any eventual deal, if one is reached over the coming weeks. Although she says she does not expect an extension will be needed, Mrs May will face fire from Brexiteers in London on the issue, which they see as a further indication of British concessions to the EU.

Arch-Brexiteer in Mrs May’s Tory Party, Jacob Rees-Mogg, dismissed the idea of an extension of the transition period as “a rather poor attempt at kicking the can down the road”.

Mr Rees-Mogg said it risked “very substantial costs” for the UK, which would have to make additional contributions running into billions of pounds into EU budgets and would almost certainly lose its current rebate. An extended transition period “means we are in the EU for longer when the EU can make rules for the UK over which we would have no say and we would be paying for the privilege”, the North East Somerset MP told Sky News.

“The government doesn’t have endless money. It has to make choices. The question the Government has to answer is if this costs billions of pounds, is it better to give the money to the EU or better to sort out the issues with Universal Credit?”

Former UK foreign secretary Boris Johnson and Mr Rees-Mogg joined the former Brexit secretary David Davis and three other former ministers in signing an open letter warning the British prime minister not to “bind the UK into the purgatory of perpetual membership of the EU’s customs union”. The group called on Mrs May to “reset” the negotiations and ditch her Chequers Brexit blueprint in favour of a Canada-style free trade agreement.

“We are close to the moment of truth. Brexit offers the prize of a better future, global free trade deals and political independence,” said the letter. “But if these potential gains are sacrificed because of EU bullying and the Government’s desperation to secure a deal, the British people will not forgive us.”

Mrs May initially suggested an “implementation period” of around two years after Brexit, to give the UK’s authorities and companies time to prepare for new arrangements, but later accepted a 21-month transition ending on the last day of 2020.

It emerged on Wednesday that EU chief Brexit negotiator Michel Barnier is ready to discuss a further year’s extension to allow time to find a solution to keep the Irish Border open.

Meanwhile, the British Irish Chamber of Commerce warned of “alarming risks” to business and trade from the possibility of a no-deal Brexit.

The chamber’s director general John McGrane said the impasse in negotiations was “deeply disconcerting” and had left companies in “an impossible place” to invest and plan “because they still don’t know what will happen” and that they may have to prepare for a hard Brexit.

“The last few months we have seen a significantly greater appreciation that there is a risk of a no-deal outcome. Lots of people who wouldn’t have conceived that, or who were blindly optimistic, are thinking they could be wrong. It would be catastrophic for many impacted by it,” Mr McGrane said

He said it was “encouraging” that a two-part proposition - an extension of the standstill post-Brexit transition period and the two-tier backstop solution to avoid a hard Irish border - could lead to a EU-UK deal, but there would have to be much work on “word-crafting” in the run-up to the next scheduled summit of EU leaders in December.

“We don’t have a form of words in any of the proposition that would enable a withdrawal agreement to be signed. That is leaving us with the no-deal potential looming with Brexit just months away,” he said. - Additional reporting PA, Reuters