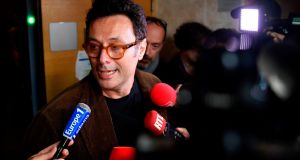 A jury in Aix, southern France, on Wednesday returned guilty verdicts against four men for the May 6th, 2014, murder of the Monaco billionaire Hélène Pastor and Mohamed Darwich, her butler and driver. Three men were sentenced to life in prison, the fourth to 30 years behind bars.

A few hours before the verdict, the principal accused, Wojciech Janowski (69) apologised to his partner of 28 years, Sylvia Ratkowski (53), and their daughter.

Ratkowski is Hélène Pastor’s daughter. Over the five-week trial, the court witnessed her slow realisation that the man she adored was a crook and pathological liar who took out a contract for her mother’s murder. As Ratkowski testified on September 21st, “I’ve lost maman. I’ve lost Wojciech. I have nothing left.”

Pastor and Darwich were gunned down in an ambush as they left the hospital in Nice, where Pastor’s son Gildo was recovering from a stroke. The gunmen were amateurs from the housing projects in Marseille, who attacked Pastor in front of surveillance cameras. They both received life sentences.

Sylvia didn’t dance, and Wojciech kept her company all evening

Pascal Dauriac, who was personal trainer to Ratkowski and Janowski for more than a decade, hired his brother-in-law Abdelkader Belkhatir to carry out the killing at Janowski’s request. He was sentenced to 30 years in prison.

In a surprise development on the eve of the verdict, Janowski’s lawyer, Éric Dupond-Moretti, admitted that Janowski ordered Pastor’s murder, but denied he wanted to kill Darwich. He was found guilty of both murders.

Dauriac testified that Janowski offered €40,000 in “bonuses” if Darwich was killed and if the gunmen stole Pastor’s handbag, to make the murder look like a banal robbery.

In her youth Pastor had run away with a Pole called Ratkowski, Sylvia’s father. Her family brought her back to Monaco. Pastor, who had a fortune estimated at €15 billion, devoted herself to her children, Sylvia and half-brother Gildo.

When Ratkowski met Janowski at a charity ball in Monaco in 1986, she was recovering from a failed marriage and had a small daughter. Sylvia didn’t dance, and Wojciech kept her company all evening. “History repeated itself,” Janowski said, referring to Ratkowski’s Polish father.

Everything about Janowski was false. His degree from Cambridge University? Purchased in Thailand by Dauriac, the personal trainer. His status as consul general for Poland in Monaco? Janowski was merely an unpaid honorary consul. His start-up company, Firmus, was a sham. He drafted an effusive Wikipedia entry for his petroleum company, Hudson Oil, which consisted of one disused refinery.

Ratkowski received a €500,000 monthly allowance. “Investors adored [Sylvia],” Janowski testified. “Whenever there was a problem, she’d call her friends and they’d sort it out.”

Janowski channelled the blank cheques Sylvia wrote him through Dubai, to create the illusion that his businesses flourished. “The only money he ever had was his wife’s money,” the lawyer for Pastor’s son Gildo, a civil plaintiff, said. During the 16 months preceding the murder, Janowski spent €7.5 million of the €9 million that Ratkowski received from her mother.

From the day I met her, I had to put Sylvia back together. Her mother and her brother Gildo were vipers

In 2012 Ratkowski was diagnosed with cancer. She had made her daughters sole heirs, in the mistaken believe that Janowski was independently wealthy. He had showered expensive gifts on Ratkowski, including a yacht and a vintage Fiat. Both were purchased with her money. He never paid the insurance on the sports car.

Defence and prosecution agreed that Janowski was status-hungry. “Wojciech Janowski has an existential need for recognition,” the prosecutor, Pierre Cortès, said in his summing-up on October 12th. “But he was ill-accepted in Monaco and in the Pastor family. That tormented him. Over the years he developed a tenacious hatred for his mother-in-law.”

“He was born in communist, Stalinist Poland,” Janowski’s lawyer, Dupond-Moretti, told the jury. “He saw his mother go to prison. His father’s property was confiscated. And the Pastor family treated him like a loser … So, yes, he invented diplomas for himself. Haven’t any of us ever lied?”

Janowski claimed police had “done everything to me but tear out my fingernails” to obtain his initial confession, when he declined the offer of a lawyer or Polish interpreter. The court was shown the video of that confession on October 3rd. It was the turning point of the trial.

In a polite exchange with the police commander, Janowski admitted, “Yes, Madame. I asked [Dauriac] if he could resolve the problem with my mother-in-law.”

Love was his motive, Janowski claimed. “My wife’s mother mistreated her every day. From the day I met her, I had to put Sylvia back together. Her mother and her brother Gildo were vipers. They wanted to destroy her.”

Prosecutor Cortès noted: “It was with the money of his companion, that is to say with the victim’s money, that Wojciech Janowski paid the killers. It doesn’t get more ignominious than that.”