Theresa May calls for government unity ahead of EU summit

British prime minister says significant progress has been made 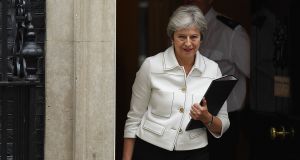 British prime minister Theresa May: The cabinet expressed support for her approach ahead of Wednesday’s summit in Brussels. Photograph: Leon Neal/Getty Images

British prime minister Theresa May has called for unity within her government ahead of an EU summit in Brussels on Wednesday, telling ministers that she can still achieve a good deal on Brexit. Ms May told her cabinet that she would never support a deal that creates a customs border in the Irish Sea or leaves Britain trapped indefinitely in a backstop arrangement.

She said that, despite the failure of negotiators to reach agreement on the backstop ahead of the summit, there had been significant progress.

“If we as a government stand together and stand firm, we can achieve this,” she said.

The prime minister’s official spokesman said that all ministers contributed to a discussion on Brexit which took up two thirds of the 2½ hour meeting. He said they agreed that Britain cannot be kept in the backstop indefinitely and discussed “the need for a mechanism to clearly define how that backstop will end”.

Ireland’s Ambassador to London Adrian O’Neill has expressed concerns about British “backsliding” over the Northern Ireland backstop by demanding that it should be time-limited. Mr O’Neill said Britain had agreed last December and again in March that there should be a backstop that would operate unless and until a permanent solution was found to keep the Border open.

“There seems to be some degree of backsliding on those insofar as this demand for a time-limited version of the backstop is not consistent with what was agreed in December and March. We are concerned by that. A backstop that has a time limit on it ceases to be a backstop,” he said.

Downing Street said the prime minister does not resile from any commitments she made in December or March but pointed out that when Britain proposed its UK-wide customs backstop last June, it said it should be time-limited.

Although the prime minister told MPs on Monday that the backstop should be temporary, she declined to say if it should have a specific end date. Her official spokesman said on Tuesday that a mechanism to determine how the backstop should end would have the same effect as making it time-limited.

Eight cabinet ministers met for pizza on Monday evening in the office of Commons leader Andrea Leadsom in what was perceived in advance as a Brexiteer caucus plotting tactics ahead of the cabinet meeting. Former Brexit secretary David Davis called on Sunday for Brexiteer ministers to rise up against Mrs May’s Brexit strategy but no ministers threatened to resign on Tuesday and the cabinet expressed support for the prime minister’s approach ahead of Wednesday’s summit in Brussels.

“The cabinet strongly supported the prime minister on the importance of maintaining the integrity of the union,” the spokesman said.

DUP deputy leader Nigel Dodds warned ahead of the cabinet meeting that if his party is unhappy with the backstop, it could disrupt the government’s business without triggering a general election.

“Under the Fixed-Term Parliaments Act there are a lot of things that we can not support in terms of the government’s domestic and financial and welfare agenda which does not trigger the possibility of Jeremy Corbyn coming into No 10,” he told the BBC.