Pompeo announces reversal of US policy on West Bank settlements 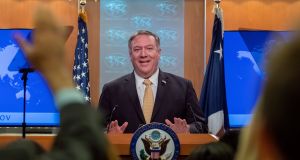 US secretary of state Mike Pompeo announced the decision at a press conference in the state department in Washington. Photograph: Erik S Lesser/EPA

The United States announced on Monday that it no longer considers Israeli settlements in the West Bank a violation of international law, the latest indication of a shift in US policy on the Israeli-Palestinian conflict under President Donald Trump.

Secretary of state Mike Pompeo announced the decision at a press conference in the state department in Washington.

Israeli prime minister Binyamin Netanyahu said the decision “rights a historical wrong,” but the Palestinian Authority denounced it as “completely against international law”.

In a statement shortly following the announcement, European Union foreign policy chief Federica Mogherini reiterated the position of the EU and the support of Brussels for a two-state solution in the Middle East. “All settlement activity is illegal under international law and it erodes the viability of the two-state solution and the prospects for a lasting peace, as reaffirmed by UN Security Council resolution 2334,” she said in a statement. “The EU calls on Israel to end all settlement activity, in line with its obligations as an occupying power.

The latest policy announcement on Israel by the Trump administration follows the US president’s decision to recognise the contested city of Jerusalem as the capital of Israel in 2017. Last year, the US formally moved its embassy from Tel Aviv to Jerusalem, with senior administration officials including Mr Trump’s daughter Ivanka and husband Jared Kushner attending the opening ceremony. Mr Kushner has been centrally involved in the Trump administration’s Middle East policy.

The unveiling of the new embassy was marred by violent clashes, as dozens of Palestinians were killed by Israeli forces along Israel’s border with Gaza.