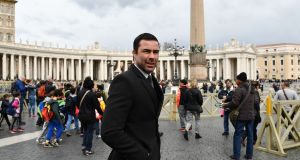 President of the Board of Directors of the Financial Information Authority of Vatican City Rene Bruelhart (47) said he had resigned. File photograph: Getty

The Vatican said on Monday the head of its financial regulator would leave, weeks after unprecedented police raids on his organisation and another key arm of the Catholic Church’s bureaucracy.

Rene Bruelhart, a 47-year-old Swiss lawyer, said he had resigned but did not go into further detail.

Vatican police entered offices of the regulator, called the Financial Information Authority (AIF), and the Secretariat of State on October 1st, seizing documents and computers and sending shock waves through the clerical establishment.

The action followed a search warrant secured by the Vatican’s own prosecutor as part of an investigation into a real estate investment in London by the secretariat, administrative heart of the worldwide Catholic Church.

Vatican secretary of state Cardinal Pietro Parolin last month acknowledged that the deal was not transparent and promised to shed light on it.

The AIF board, headed by Mr Bruelhart, has said the regulator did nothing wrong when it looked over the property investment.

The Vatican indicated that Mr Bruelhart would leave at the end of his five-year mandate on Tuesday. It also said a successor would be named after Pope Francis returns from a trip to Asia on November 26th. It did not go into the reasons for his exit.

“I resigned,” said Mr Bruelhart shortly after the announcement was made.

Two weeks later, Domenico Giani, the Vatican’s long-time security chief and the pope’s personal bodyguard, resigned over the leak of a document related to the investigation.

The Holy See said Mr Bruelhart’s successor would be announced soon in order to “assure continuity”.

Vatican prosecutor Gian Piero Milano is looking into possible crimes such as embezzlement, abuse of office, fraud and money laundering connected to the purchase of the building by the Secretariat of State, according to people familiar with his search warrant.

The secretariat spent about $200 million in 2014 for a minority stake in a complex plan to buy the building in London’s Chelsea district and convert it into luxury apartments.

The personnel changes at the AIF come as the Holy See is preparing for a new evaluation by Moneyval, a monitoring body of the Council of Europe, which has given Vatican financial reforms mostly positive reviews in its most recent evaluations.

Moneyval executive secretary Matthias Kloth said last month after the police raids that the organisation was “following developments closely”. He said Moneyval’s on-site visit will proceed as scheduled next spring ahead of a new evaluation in December. – Reuters