US and Russia back ceasefire in southwest Syria, says Tillerson 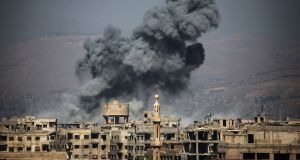 Aftermath of a reported air strike on the rebel-held town of Ayn Tarma, in Syria. Photograph: Amer Almohibany/AFP/Getty Images

The US, Russia and regional countries have reached a ceasefire deal in southwestern Syria, one of the combat zones in a six-year civil war, a US official said on Friday.

US secretary of state Rex Tillerson was expected to provide more details of the deal to reporters in Hamburg later on Friday, the official said.

Russia and Iran are the main international backers of Syrian president Bashar al-Assad while Washington supports some of the rebel groups fighting for his ouster.

Before leaving for Hamburg, Mr Tillerson said the US was prepared to discuss joint efforts with Russia to stabilise Syria, including no-fly zones, ceasefire observers and co-ordinated deliveries of humanitarian assistance.

Mr Tillerson was present at a meeting in Hamburg between US president Donald Trump and Russian president Vladimir Putin, along with Russian foreign minister Sergei Lavrov. The German city is hosting a summit of the G20.

Mr Lavrov said the accord includes “securing humanitarian access and setting up contacts between the opposition in the region and a monitoring centre that is being established in Jordan’s capital.”

Mr Tillerson said that by and large the objectives of the US and Russia in Syria “are exactly the same”.

But Washington and Moscow have long been at odds over Syria. The US has often called for the removal of Mr Assad, who it blames for the shooting of protesters at the start of the conflict and, more recently, for launching chemical weapons attacks on civilians. Russia and Iran strongly back the Syrian leader, who gives both countries a strategic foothold in the Mediterranean Sea.

Despite the ceasefire deal, Mr Tillerson said that the US still sees “no long-term role for the Assad family or the Assad regime. And we have made this clear to everyone. We certainly made it clear in our discussions with Russia.”

The US and Russia held secret talks on creating a “de-escalation zone” in southern Syria, Western diplomats and regional officials said in early June.

The proposed zone was in Deraa province, on the border with Jordan, and Quneitra, which borders the Israeli-occupied Golan Heights, they said. The Syrian conflict has killed nearly 500,000 people, according to the Britain-based Syrian Observatory for Human Rights, and forced millions of others to flee the country.

Backed by Russian air power, Mr Assad has regained ground in the last year that he lost to the mostly Sunni Muslim rebels earlier in the conflict. The Syrian army has in recent months escalated its strikes in the southwestern city of Deraa in a campaign to reach the border with Jordan and wrest full control of the city. The army said on Monday it would suspend combat operations in southern Syria, but rebels said the military had violated the ceasefire by striking areas under their control.

Separately, Russia, Turkey and Iran failed in talks on Wednesday to finalise an agreement on creating four de-escalation zones in Syria after Ankara raised objections. The failure was seen as a setback for Moscow, the main architect of the plan, as it seeks to take the lead in global efforts to settle the Syrian war. The US is only an observer in the so-called Astana process.