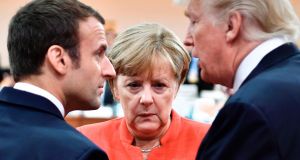 Like Moses, Angela Merkel’s first journey was in a basket. Weeks after her birth in 1954 she left Hamburg in her parents’ arms to a new life in East Germany, behind the iron curtain.

After a few eventful years away, Merkel is back in the port city of her birth for her greatest challenge yet. Wearing a scarlet blazer and a restless gaze, she launched into a two-day political marathon as host to leaders representing two-thirds of the world’s population.

With Donald Trump’s US setting a new course, and China impatient for a new global leadership role, the Group of 20 leaders are drifting apart on key questions of free trade, security and climate change.

Merkel’s hope is she can anchor a compromise deal in Hamburg that holds together the G20 – and the post-Cold War order.

With brisk, pursed-lipped efficiency, less salty sea captain than Teutonic bean an tí, Merkel bestrode the summit deck on Friday, watching who was swimming, who was sinking and who – Donald Trump – seemed utterly at sea.

After an early-morning retreat – no bathrobes, just a bracing chat about North Korean missles seated in cream leather armchairs – the leaders emerged for a family photograph.

Merkel’s V-for-victory hand signal seemed a little premature given there were almost 40 men and just four women in the shot. Norway’s beaming premier Erna Solberg was only a guest while Christine Lagarde was representing the IMF and not a country.

Inside they went to the conference room, an expanse of white walls and orange carpet perhaps bought on eBay from a defunct Italian TV talk show. New boy Emmanuel Macron was all hands as he worked the room – touching, brushing, squeezing and pleasing other leaders – until, like a moth in a Marlene Dietrich song, he found himself drawn to the Merkel flame.

She had just shaken off a persistent Vladimir Putin when Macron popped up, followed by a lumbering Donald Trump, clutching briefing notes in Dr Seuss print.

Eventually everyone sat down and Merkel asked her top table partners to turn around for a final photograph. As in the Oval Office a few weeks ago, Merkel’s voice appears to operate on a frequency that Trump cannot hear. He was not for turning until Theresa May tapped him on the shoulder.

Following a working lunch on global growth and trade, with everyone braced for an “America First” moment from Trump, the president ducked out early of the afternoon session, about the Chinese conspiracy that is climate change.

He had a date with the Russian president who, even the reality television billionaire admitted on Thursday, may have helped manipulate Trump into the White House.

The day ended at Hamburg’s stunning Elbphilharmonie concert hall for Beethoven’s Ninth Symphony, best known for its uplifting Ode to Joy chorus, co-opted by the European Union as its anthem.

The G20 summit in Hamburg may be the moment where globalisation goes into another round, with the same or modified players and rules. Or it may well be the moment when, historians will tell us later, global co-operation as we knew it sailed off over the horizon.