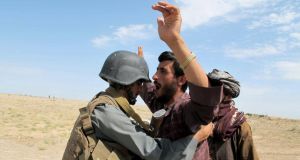 A policeman inspects a passenger at a checkpoint in Helmand province, Afghanistan. Photograph: Abdul Malik/Reuters

The Taliban have chosen supreme leader Mullah Omar’s deputy to replace him, two militant commanders said on Thursday, as Pakistan announced that scheduled peace talks between the insurgents and the Afghanistan government would be postponed.

Pakistan cited a statement in Kabul on Wednesday about Mr Omar’s death as the reason for the delay in negotiations, amid fears that it could trigger a potentially bloody succession battle.

Mullah Akhtar Mohammad Mansour was appointed leader at a meeting of the Taliban’s top representatives, many of whom are based in the Pakistani city of Quetta, according to the sources who were present at the shura, or gathering.

“The shura held outside Quetta unanimously elected Mullah Mansour as the new Emir of the Taliban,” said one commander at the Wednesday night meeting.

“The shura will release a statement shortly.”

Sirajuddin Haqqani, leader of the powerful Haqqani militant faction, will be a deputy to Mr Mansour, both commanders added.

Mr Mansour will be only the second leader the Taliban have had since Mr Omar, an elusive figure rarely seen in public who founded the ultra-conservative Islamist movement in the 1990s.

The Taliban eventually conquered most of Afghanistan, imposing strict Islamic law before being driven from power in 2001 by a US-led military intervention.

Afghanistan’s government said on Wednesday that Mr Omar died more than two years ago in the Pakistani city of Karachi.

“We are aware of the reports and trying to ascertain the details,” Pakistan’s foreign ministry spokesman Qazi Khalilullah said.

The announcement threw into disarray a fledgling peace process fostered by neighbouring Paksitan aimed at ending more than 13 years of war between the hardline Islamist Taliban and the Western-backed government of Afghanistan.

The two Taliban commanders did not directly confirm Mr Omar’s death, but one said: “If we are electing a new leader to head the movement, you can yourself understand what that implies”.

The Taliban’s official spokesman said in a statement early on Thursday that its official team of negotiators based in Doha was “not aware of this process” in Pakistan.

Later in the day, the Pakistani foreign office said a planned second round of meetings set for Friday would be delayed at the request of the Taliban leadership. The two sides held inaugural talks in Pakistan earlier this month.

“Pakistan and other friendly countries of Afghanistan hope that the Taliban leadership will stay engaged in the process of peace talks in order to promote a lasting peace in Afghanistan,” the foreign ministry statement said.

Mr Mansour’s appointment is unlikely to please everyone in the Taliban. Key field commanders have criticised the peace process and vowed to fight for power, rather than negotiate it.

Several have left the movement altogether, pledging allegiance to Islamic State in the Middle East and targeting the Taliban itself.

In a reminder of the threat posed by insurgents stepping up their campaign to overthrow the government, the Taliban captured a district in the southern province of Helmand that foreign troops struggled to secure for years.

District officials said the Taliban had wrested control of the Nawzad district on Wednesday after two days of fighting.

Residents of the area said bodies of security personnel and Taliban fighters were lying in the streets after the battle.

The Taliban has taken control of pockets of territory across the country since Nato withdrew most of its forces at the end of 2014, leaving Afghanistan’s army and police to quell the violence. Thousands of people are killed each year.