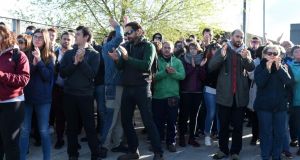 Supporters gather outside the Madrid court as eight people go on trial accused of assault and terrorist threats on two civil guard officers in northern Spain in 2016. Photograph: Fernando Villar/EPA

The trial has got under way of eight people charged with terrorism-related offences for their alleged role in an altercation which led to two Spanish civil guards being hospitalised.

While some see the case as a bar brawl which has been blown out of proportion, others claim it is a sinister throwback to the days of Basque separatist violence.

The incident took place in October 2016, during local festivities in the town of Alsasua, in the Basque-speaking area of the northern Navarre region. But that is about all the two sides in the trial can agree upon.

The two civil guards involved allege that on entering a bar with their girlfriends they were recognised by local youths, who insulted them and told them to leave. According to the prosecution, the youths then attacked the two men, one of who suffered a broken ankle and the other various injuries. One of the women with them was also injured.

The prosecution says the episode was part of an orchestrated campaign of intimidation against Spanish security forces and have linked it to the kind of scare tactics traditionally used by supporters of terrorist group Eta. Nationalists regard Navarre as part of the Basque homeland, and the region witnessed much of Eta’s separatist violence during its four decades of terrorism, which ended with a permanent ceasefire in 2011.

But the defendants, aged between 21 and 31, insist they have had no involvement in any strategy to intimidate security forces.

“It’s been made clear that our children are not terrorists,” Isabel Pozueta, the mother of one of the defendants, said on Monday after the first session of the trial, which is taking place in the high court in Madrid.

“They were just some normal kids, like those of any mum or dad, who went out for a good time and what happened was a bar brawl.”

Ms Pozueta’s son, Adur Ramírez, is one of three defendants who have been in custody for 18 months leading up to the trial.

On Monday, all eight defendants denied being directly involved in the altercation at all.

The families have warned that the trial has been influenced by terrorism victims’ groups who, they say, want punitive sentences as a form of revenge on Basque nationalists. Amnesty International has also expressed concerns about the lengthy prison terms the defendants could face.

On Tuesday, the two civil guards testified, alleging that a total of 20 or 25 people attacked them in an assault which began inside the bar and continued on the street.

One of the guards, who had only recently been posted to Alsasua when the incident took place, described it as a town still in thrall to pro-independence extremism.

“I’m used to violent situations and stress because of the job and I’d never been through anything like this,” he said of the alleged assault. “We were outnumbered, [we had] that feeling of being hated because we were civil guards and I’d never felt that before.”