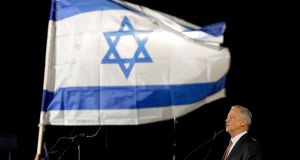 Benny Gantz, chairman of the Israel Resilience Party, speaks during the presentation of a list of election candidates, in Tel Aviv, Israel. Photograph: Abir Sultan/EPA

Israel’s two biggest centrist parties have agreed to run in the April 9th election on a joint list called Blue and White, mounting a serious challenge to prime minister Binyamin Netanyahu ahead of the poll.

The first polls after the merger showed a dramatic turnaround in predictions for the election. Channel 13 forecast a massive 10-seat lead for the new grouping over Mr Netanyahu’s ruling Likud – 36 seats to 26 in the 120-seat Knesset. Other TV polls showed a gap of three or six seats for Blue and White over Likud.

All the polls still showed the right-wing/religious bloc winning more seats than the centre-left bloc. However, according to Channel 13 the gap between the two was only two seats, throwing the elections wide open.

Blue and White will be headed by Israel’s former top general Benny Gantz, who set up his Israel Resilience Party a few months ago. Yair Lapid, chair of the Yesh Atid party, agreed to take the number two spot on the alliance’s list after weeks of arduous negotiations between the parties, where egos were as much of an obstacle as policy.

Under the agreement, clinched hours before the deadline to present final Knesset lists for the election, if Blue and White is tasked with forming a government, Mr Gantz and Mr Lapid will take turns serving as prime minister, with Mr Gantz the first to step into the role. Mr Lapid would succeed him after 2½ years.

Another former top general, Gabi Ashkenazi, was a key mediator forging the alliance, and he joins the list in the number four slot. Ashkenazi is a popular figure and is seen, critically, as a personality who can shift votes from the right-religious bloc to the centre.

A third top general, Moshe Ya’alon, had already joined Gantz’s party, and, with three senior ex-military figures in its top four slots, Blue and White is being dubbed the “generals’ party”, with security credentials second to none – always a vote-winner in Israeli politics.

Mr Gantz vowed to win the election by a large margin.

“Our government will not be for inciting extremists, but for everyone,” he said on Thursday night.

“Gantz and Lapid are offering a weak left-wing government dependent on the Arabs.”

The merger in the political centre came the morning after two far-right parties, under intense pressure from Mr Netanyahu, formed an alliance with Jewish Power to bolster the right-wing bloc. Jewish Power is an extreme right-wing party founded and filled by disciples of US-born rabbi Meir Kahane, whose Kach party was disqualified as racist in the 1980s.

“They want to bring Kahanists into the next government,” Mr Ya’alon said. “Is this what we wanted? For Kahanists, whose banner is ‘Death to Arabs’, to lead Israel? Why is Netanyahu doing this? For political survival.”

The next key milestone in the election campaign is expected in the coming weeks, when Israel’s attorney general is due to decide on whether Mr Netanyahu should be indicted in a series of corruption charges. The prime minister denies the allegations.