Tourist cancellations were at 40 per cent in Bethlehem last Christmas 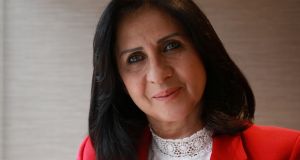 Vera Baboun is the first woman mayor of Bethlehem. She is also Catholic. It is the case in the Palestinian Territories that those cities deemed Christian have Christian mayors. They include Ramallah, Birzeit, Zababdeh, Jifna, Ein ’Arik, Aboud, Taybeh, Beit Jala, Beit Sahour, and Bethlehem.

Before becoming mayor of Bethlehem for a four-year term in 2012, she had been head at the Catholic High School in Beit Sahour, an English literature lecturer at Bethlehem University and dean there for six years.

Education was her immediate reason for being in Ireland last week. She had come at the invitation of the Friends of Bethlehem University of Ireland group with the hope of raising funds to help with the education of some of the 3,300 students at the university.

“The situation is really difficult,” she said. Israeli visa restrictions mean international students cannot attend the university unless they apply for three-month tourist visas, and not many want to do so. So international student numbers and the revenue they bring in are reduced.*

At Bethlehem University 70 per cent of students are Muslim and 72 per cent female, with 1,500 from East Jerusalem. She also wanted to tell people how much the political situation affects education in Palestine. Education was “very important to families” in Bethlehem.

Access can be a problem.The so-called Israeli security wall in Bethlehem “is in the middle of the city”, with “a new wall to be built to confiscate another 3.2sq km of territory” there. Some of the biggest Jewish settlements were on the northern borders of Bethlehem, she said.

The level of poverty in the governate stands at 22 per cent with unemployment at 27 per cent. Education levels are high, but “in Bethlehem the young cannot access Jerusalem, so they end up staying within the walled city. Bethlehem is far from [Palestinian capital] Ramallah, at least two hours, so the young have two options, stay in Bethlehem or go to Dubai or elsewhere”. This was the cause of the high jobless rate.

On a more positive note she spoke of a new industrial zone in Bethlehem, supported by the French government, that already employs 5,000 people.

She noted how, in “the recent youth upheavals”, they had lost “155 young men and women in clashes that took place between these unarmed young people and the army”.

Tourism had been “critically affected”, with cancellations last Christmas reaching 40 per cent. Bethlehem was, historically, a tourist city, she said.

Traditionally there’s a fireworks ceremony when the Christmas tree is lit in Bethlehem on the first Saturday of December each year.

However, on Saturday, December 5th last, last there were no fireworks, but, “because of the situation, we decided to ring the bells of the Church of Nativity and to send invitation to do so in twinned cities”.

As a result, 69 churches in cities around the world rang their bells in solidarity.

“A state of Palestine is not only matter of justice but a matter of leading a normal life,” she said, adding, “we already have the nucleus of a State.”

It was “really ironic to live in a place where your movement is constrained for 63 years, and to consider this abnormality as normal,” she said.

It was also the case that the Palestinian situation was overshadowed by what was happening in Syria, she said, as it had been by the war in Yemen, and had been by the Iran/ Iraq war, the first and second Gulf wars; yet “always it comes back to the core problem of the region”.

Where Ireland was concerned, support was very important. It was “very important that a people who have experienced suffering understand the suffering of others. Very, very, very crucial,” she said.