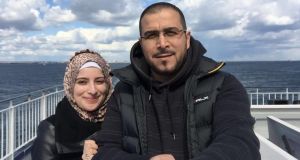 Syrian ex-activist Razan Alakraa with her husband, Ahmad Alhameed, in Portsmouth, England. Alakraa has stopped documenting crimes for the sake of her mental health.

Six years ago this month, many in Syria felt their country was on the precipice of monumental change. Authoritarian regimes across North Africa were capitulating to the irresistible power and force of the masses. People had begun taking to Syria’s streets, too, first reciting slogans demanding dignity and freedom, and later, for political change.

“We were waiting for it,” says Idlib-based Raed Fares, one of the best-known faces of the revolution.

“For a month before we were trying but it didn’t work. We wrote on the walls and streets anti-regime slogans. When we saw [the initial anti-government protests in the southern city of Daraa] we felt we could do it too here.”

Soon anti-regime demonstrators were being gunned down in the streets.

By mid-March 2011 the weekly protests that centred on Friday prayers called for the fall of president Bashar al-Assad’s government.

When Ramadan came around that summer, a month of daily visits to the mosque, residents of Damascus predicted Syria would turn into Friday, every day.

“We thought it would not take more than one or two months for the regime to fall as long as we kept up the work,” says Fares.

What has followed are the deaths of around a half million people, with 12 million more displaced in the worst humanitarian crisis since the second World War.

Since the early days of the revolution, the lives of the organised resistance responsible for informing the world of crackdowns in the farthest corners of the country have changed, in some instances, beyond recognition.

Some activists, such as Rami Nakhla, have been discouraged by the ferocity of the regime’s response and the indifference of the international community.

“I was responsible for making sure we stayed non-violent and civil [during the first months] but then news starting coming in that people with arms were protecting the protesters, and they then started shooting at the shabiha,” he says, referring to pro-government militia gangs.

“All of us acknowledged that we were helpless to stop it. I really believe this was the most difficult part of the entire time.”

From Sweida in southern Syria, Nakhla fled Syria in 2011 before spending a year at Yale University in the US and then as a director of The Day After project, an initiative created to map out Syria’s post-war democratic future.

Today, Nakhla is working from the Turkish city of Gaziantep on documenting war crimes and crimes against humanity.

“We hope there can be justice but accountability is not even on the agenda of international discussions. That’s what is most troubling right now.”

In August 2011, Razan Alakraa, whose family is from Homs but who lives in England, served as a contact between the first rebel-controlled district anywhere in Syria – Baba Amr in Homs – and the international news media.

Six months later, the district fell to intense government shelling, which took the lives of journalists Marie Colvin and Remi Ochlik, and dozens of Syrian activists.

Alakraa’s recent family history is a picture of tragedy, and crystallises the extent of the destruction war has wrought.

An uncle and cousin are dead; another cousin, aged 16, was taken by the regime after the fall of Bab Amr.

A second cousin, a graffiti artist, was killed by a regime missile strike. Another cousin on her father’s side was executed by Islamic State, she says.

“Another cousin on my dad’s side was detained by the regime and tortured but freed, and he went to join the Free Syrian Army and was killed by a regime missile. His brother died on the front line with the FSA. Their mother had three of her grandchildren executed by Isis, ” she says,using another name for Islamic State.

“My mum’s two uncles were killed. Another aunt had her 16-year-old son arrested by the regime and sent back dead three years later.”

Her father-in-law and sister-in-law, she adds, were also killed by the regime. An uncle by marriage “was found dead in the Caesar [Syrian government detentions] photos. My dad’s other sister lost her son to a regime missile”.

She says her life is worse now than before the revolution broke out, and she has stopped documenting crimes for the sake of her mental health.

“That’s one thing I feel guilty about,” she says.

Islamic State and its particularly gruesome murders, the levelling of whole city districts and the destruction of some of civilisation’s most important monuments to history have followed those protests of 2011.

More than a million Syrians have fled to Europe in search of safety, and the pro-democracy activists have been pushed to the margins by the sheer brutality of the conflict.

Raed Fares adopted a different approach to the horror and destruction.

From his hometown of Kafranbel in south Idlib province, a town separated from the Assad family’s home village by a single mountain, he developed a brand of activism that succeeded in striking a chord between the suffering and the rest of the world through humour, satire and smarts.

Kafranbel’s Friday protest banners have seen the town offer condolences to the victims of the Boston marathon bombing in March 2013 and depict the Russian and Syrian presidents in a romantic embrace – a scene adopted from the film Titanic.

“Because there’s a lot of stress and pressure, pain and suffering, you need humour just to survive. In the beginning, we knew in order to get the world’s attention we needed to use humour,” he says. “It worked to an extent.”

In January 2014, Fares was shot in the back in Kafranbel by suspected Islamic State militants. He lost a lot of blood but survived.

Recent weeks have seen the Syrian regime and Russian jets turn their attention to opposition-held towns in Idlib province with air strikes pounding the area daily.

Two days before Fares spoke to The Irish Times, warplanes struck Kafranbel, killing at least six civilians – five from a single family. The attack went largely unnoticed by the outside world.

“A lot of people have lost loved ones and there have been airstrikes for three nights – I can hear the warplanes outside right now,” he says.

Despite the cost, Razan Alakraa believes the revolution has not failed, despite the fact warlords of various stripes and nationalities dominate much of the landscape.

“The only failure is that Assad has been left in power until today and allowed to kill, destroy and create terrorist groups,” she says.

Nakhla believes that it was clear from early on that pro-democracy, liberal activists didn’t have a hope.

“The revolution definitely failed a long time ago,” he says. “I think the opposition wasn’t prepared enough, and we believed what the West told us.”