Simon Cumbers killer among those executed in Saudi Arabia 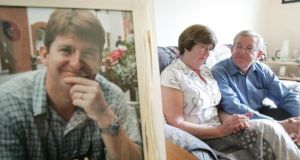 Bronagh and Bob Cumbers, parents of BBC Cameraman Simon Cumbers (in photo on left) at their home in Navan. Cumbers (36) was shot and killed in 2004 when in the country working on a programme on al Qaeda. Photograph: Alan Betson/ The Irish Times

One of those responsible for the fatal shooting of Irish journalist Simon Cumbers in Riyadh in 2004 is believed to be among the 47 people executed in Saudi Arabia on Saturday.

The BBC World Service reported that Adel al-Dhubaiti, who was convicted over the shooting, was executed.

Al-Dhubaiti took part in an attack outside the house of a suspected al Qaeda militant in the Saudi capital, Riyadh in June 2004.

During the attack the 36-year-old Cumbers was killed and Frank Gardner, now the BBC’s security correspondent was seriously wounded.

In a 2009 interview Cumbers parents Brona and Bob, who live in Navan Co Meath, had asked the Saudi government not to execute Al-Dhubaiti, saying their son would not have wanted his killer killed.

Cumbers began his career in radio in Dublin before joining ITN in the North. He also worked around the world for Associated Press Television (APTN).

He covered stories including the signing of the Belfast Agreement, the Omagh bombing and the war in Iraq.