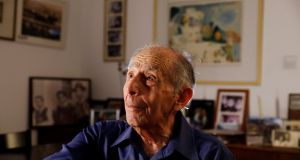 Shlomo Hillel in 2018. A former Israeli diplomat and minister, he had been an operative for the Haganah, helping to smuggle Jews out of Iraq. Photograph: Ronen Zvulun/Reuters via New York Times

Shlomo Hillel, a Baghdad-born Israeli operative who in the late 1940s and early 1950s used bribes, fake visas and a network of smugglers to move more than 120,000 Jews from Iraq to Israel, died on February 8th at his home in Ra’anana, Israel. He was 97. His death was confirmed by his son, Ari, who did not specify a cause.

Hillel was just 23 when the Haganah, a paramilitary organisation in what was then British-controlled Palestine, sent him undercover to Iraq. Jews had lived there for centuries, mostly in harmony with their neighbours, but growing Arab nationalism and anti-Zionist sentiment, including a 1941 pogrom in which several hundred Jews were killed, were making their situation precarious.

Hillel, disguised as an Arab, was there to lay the groundwork for migration, teaching Hebrew and rousing pro-Zionist sentiment. He also helped smuggle small numbers of Jews to Israel in trucks travelling between Baghdad and Haifa, a major port in Palestine.

After a year he returned to Israel, but he soon grew restless. As he watched ships full of Jews arrive from Europe – one carried his future wife, Temima – he decided that Iraqi Jews deserved the same opportunity. But Iraq forbade them to emigrate, and the British had severely limited how many Jews could move to Palestine. Hillel would have to act in secret.

With the Haganah’s support, he found American pilots who had a cargo plane and an itch for adventure. “Someone in the United States had told two of them, ‘Look, in Palestine there are some crazy people who are willing to pay a lot of money to smuggle Jews to Palestine,” Hillel said in a 2008 oral history.

The pilots were to be paid upon arrival in Israel, but in Baghdad one of them suddenly changed his mind, and demanded the money before they left. Knowing that the pilot had an account with a bank in New York, Hillel lied and said he had one with the same bank, and wrote him a cheque, drawn on a fake account number.

The plan went perfectly. They took off just after midnight so they could arrive at daybreak, before the British were awake. When they landed in a field near Yavne’el, a town on the Sea of Galilee, an agent from the Mossad, Israel’s intelligence service, handed the pilots a bag of gold coins. Hillel retrieved his fake cheque.

The Haganah ran the operation, called Michaelberg – derived from the pilots’ names – one more time, bringing back 50 more Iraqis, before the outbreak of the Israeli war for independence in 1948 rendered the flights too risky. In June 1948, with the war still raging and the situation growing worse for Iraq’s Jews, Hillel went to Iran, this time disguised as a Frenchman. He had passed through Paris, where he encountered a priest named Alexander Glasberg, who had converted to Roman Catholicism from Judaism. He had saved some 2,000 Jews during World War II by hiding them in monasteries, and was now involved in getting European Jews to Israel.

The two decided that if Jews could make it across the porous border to Iran – and if Hillel could bribe Iranian police to look the other way – then Glasberg, who was friends with the French interior minister, could arrange visas for them to get to Israel. Over a few months, about 12,000 Jews made the trip.

But even this was not fast enough for Hillel, who had since returned to Israel. In 1950 a new government in Iraq passed a law allowing Jews to migrate for one year. Here was his chance to get tens of thousands of Jews out of the country. Hillel travelled to Baghdad once more, this time disguised as a Briton named Richard Armstrong, representing an American charter company called Near East Air Transport. The company, owned by a pro-Israel American, was real, although it received much of its funding from the Mossad.

Despite severe restrictions – they could take only one suitcase each, and a small amount of money and valuables – about 90,000 Jews registered to emigrate in the first two months. By 1952, about 124,000 had migrated to Israel on 950 flights in what the news media called Operation Ezra and Nehemiah, after the Old Testament prophets who had led the Jews out of Babylon. Just a few thousand stayed behind, and by 2008, there were fewer than 10 Jewish men left in Iraq.

Although Hillel was later lauded for his work – in 1988 he received the Israel Prize, the country’s highest civilian award – he remained modest about his place in history. “I was lucky to be in the right place at the right time,” he said in a 2006 interview.

Shlomo Hillel was born on April 9th, 1923, in Baghdad, the youngest of 11 children of Aharon and Hanini Hillel. His father ran an import-export business, and his family was part of the city’s sizable Jewish middle class. In 1933 Iraqi soldiers massacred about 500 Assyrian Christians near the city of Mosul. Shlomo and his father watched the Iraqis march triumphantly through Baghdad. “If this is what they do to Christians, what will they do to us?” he recalled his father saying.

The next year the Hillels moved to Israel, where Shlomo attended Hebrew University before becoming a co-founder of Maagan Michael, a kibbutz in northern Israel. He married Temima Rosner in 1952. She died in 2011. In addition to his son, Ari, he is survived by three granddaughters. His daughter, Hagar, died in 2005. – New York Times service