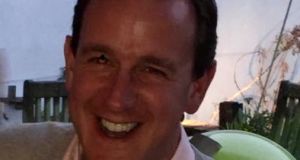 Richard O’Halloran has been ordered to pay €29.7m before he can leave China.

Diplomatic contacts on the case of Irish man Richard O’Halloran, who is being detained in China, have been described as “constructive”.

Taoiseach Micheál Martin has written to Chinese premier Li Keqiang asking for a review of the case “on compassionate grounds”.

Mr O’Halloran, a 45-year-old father of four from Foxrock in south Co Dublin, travelled to China in February 2019. He has been prevented from leaving after becoming embroiled in a legal dispute involving the Chinese owner of a Dublin-based aircraft leasing company for which he works.

He has been ordered to pay $36 million (€29.7 million) to the Chinese authorities before he can leave the country.

Mr O’Halloran has spent most of the time in his hotel to avoid contracting Covid-19 because of an underlying lung condition.

Mr Martin has joined President Michael D Higgins and Minister for Foreign Affairs Simon Coveney in raising the case with the Chinese authorities.

A spokesman for Mr Martin said: “The Taoiseach wrote to the Chinese premier to ask him to review the case on compassionate grounds.”

The spokesman said the ongoing diplomatic contacts had been “constructive”.

The Chinese embassy in Ireland has been contacted for comment.

A Department of Foreign Affairs spokesman said the case was “highly complex”.

There is said to have been ongoing engagement with the Chinese authorities since Mr O’Halloran was prevented from leaving the country in 2019 with a view to facilitating his return to Ireland.

The spokesman said: “Minister Coveney has written directly to Chinese foreign minister Wang Yi on three occasions, and has also spoken with him by phone, and he remains actively and personally engaged.

“President Higgins has also exchanged correspondence with president Xi of China in relation to the case.

“The Taoiseach has written to his own counterpart in China, and has engaged with the Chinese ambassador in Dublin.”

The spokesman said: “We will continue this engagement and continue to provide all possible consular assistance to the citizen until he is permitted to leave China.”

A Seanad debate on Mr O’Halloran’s case due to take place last Monday was postponed for two weeks because talks were at a “delicate stage of negotiation”.

Independent Senator Michael McDowell said Mr Coveney contacted him about the motion and requested they delay “in case it might set that process back”.