Brexit and rise of the right: What 2017 holds for Europe 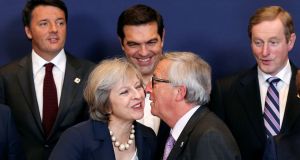 2017 promises to be just as momentous.

Britain’s exit from the EU will dominate the agenda. The British government is expected to activate article 50 in March, triggering the formal two-year exit process. Already, the EU institutions have taskforces in place and have been liaising with the 27 remaining member states.

All signs are that Europe will strike a hard bargain. It is almost certain that some kind of transitional deal will have to be negotiated to govern British-EU relations during the period Britain leaves the bloc and before a new free trade agreement is agreed, a process likely to take many years. With even Britain’s allies such as Ireland insisting that the principle of free movement is not negotiable, the talks are likely to be difficult.

But while the gargantuan task of extricating Britain from 43 years worth of EU law will dominate the legislative agenda in Brussels, myriad other challenges loom.

An early test for the EU will come in January when member states are due to roll-over existing sanctions on Russia.

The election of US president-elect Donald Trump, who has publicly voiced admiration for Russia’s president Vladimir Putin, has prompted unease , not least among Baltic nations who fear Russian aggression. With the conflict in Ukraine – which has already claimed 10,000 lives – continuing, Brussels is under pressure to press Russia to adhere to a peace agreement signed in Minsk in 2014, even as some of its own member states argue that sanctions should be loosened.

Other challenges loom in terms of foreign policy. Turkey, which dominated EU politics in the first half of 2016 after Brussels signed a controversial refugee deal with Ankara, will continue to pose difficulties for the EU. With calls growing for Turkey’s EU membership talks to be suspended in the wake of the government crackdown following an attempted coup in July, President Tayyip Erdogan has threatened to pull out of the refugee deal.

Turkey’s status as a Nato member and involvement in the Syrian war makes it too important for the EU to ignore, and EU leaders will be keen to keep the lines of communication open with Ankara whatever the challenges.

But while foreign policy matters promise to loom large in the EU’s agenda in 2017, there are also challenges closer to home.

2017 could be a watershed moment for European politics with a number of national elections taking place across the bloc. France will elect its new president in April or May, while German federal elections are scheduled for September, though the process of forming a government could take some months .

Dutch voters go to the polls in March, while Hungary and Slovenia hold presidential elections during the year.

Following votes in Austria and Italy in early December, these national elections, particularly in France and Germany, could have crucial ramifications for the future of the European Union. While much international hope is being invested in German chancellor Angela Merkel as one of the last true leaders of the western liberal order, her CDU party will face a significant challenge from the eurosceptic Alternative for Deutschland (AfD) party as well as cross-party voters disillusioned with her refugee strategy.

France will have a changing of the guard after President François Hollande announced he will not run, leaving the race open between Conservative candidate François Fillon and Front National leader Marine Le Pen.   The spectre of a Le Pen victory is a fear for many in Brussels who believe that a Front National president could precipitate the disintegration of the EU, though officials hope that tactical voting will ultimately prevent this outcome.

The packed national political agenda for 2017 and the inevitable focus on Brexit may mean that 2017 is in fact a quiet year for the European Union in terms of legislative proposals and decision-making. As the union takes stock of the Brexit vote, even senior German politicians have said that this is not the time for any great leap forward in terms of EU integration.

While celebrations to mark the 60th anniversary of the Treaty of Rome on March 25th in the Italian capital may generate discussions on the next step forward for the EU, ultimately 2017 will be about preserving what the EU has rather than any grand plans for the future. Devising the next phase for the European Union may be a project for another day.