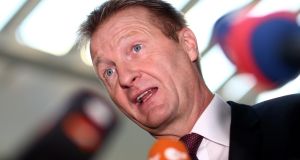 Ralf Jaeger, North Rhine-Westphalia interior minister, speaks to the media after a special meeting at the state parliament in Dusseldorf. Photograph: Christof Koepsel/EPA

The Tunisian man who is suspected of killing 12 people last month by ploughing a truck into a Berlin Christmas market had lived under at least 14 different names in Germany, a regional police chief said on Thursday, raising more questions about security lapses in the run-up to the attack.

Anis Amri, who was shot dead by Italian police in Milan on December 23rd, had been marked as a potential threat by authorities in the western federal state of North Rhine-Westphalia (NRW) in February 2016, some six months after he arrived in Germany and applied for asylum.

“He acted in a conspiratorial manner and used various personalities,” Dieter Schuermann, head of the NRW criminal police unit, told the regional parliament during a briefing on the matter.

The 24-year-old divided his time between NRW and Berlin, where intelligence officials also classified him as a potential threat.

However, there was a consensus among security officials that he posed no concrete threat, Mr Schuermann said.

An investigation into the attack is focusing on whether Amri had any accomplices.

Police arrested another Tunisian man in Berlin this week, who prosecutors say had dinner with Amri at a restaurant in the capital one day before the attack on December 19th.

A spokeswoman for the prosecution said on Wednesday that Amri and the new suspect, identified as 26-year-old Bilel A, had “very intensive discussions” at the restaurant on the eve of the attack.

The co-owner of the restaurant told Reuters on Thursday he had not been aware that Amri had dined at the premises until police asked him if they could have CCTV footage recorded on December 18th.

“No one who was here that night remembers seeing him,” said the co-owner.

“The police said he was here between 8 and 9pm,” said the man.

At the shelter for migrants at the western end of Berlin where Bilel A was arrested, refugees said Bilel A had always told them he was Libyan.

“The strangest thing about him was that he used to pray every day but most evenings he would go out to nightclubs with his friends,” said Mohammed, a 21-year-old Syrian refugee who said he had shared a room at the shelter with Bilel A six months ago before moving to another room at the facility.