Green MEPs arrested in Belgium after nuclear protest at US base 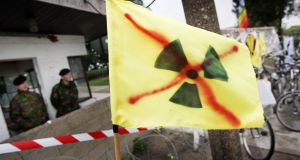 A protest at the Kleine Brogel nuclear base in Belgium in 2006. Photograph: Yorick Jansens/AFP/Getty Images)

Three Green MEPs were arrested by police in Belgium on Wednesday morning following a protest on a US air base against nuclear weapons.

Molly Scott Cato, Michèle Rivasi and Tilly Metz were among activists from a Belgian anti-nuclear group, Agir pour la Paix, who broke in to the Kleine Brogel air base in the east of the country to protest against the stockpiling of US B61 nuclear bombs in Europe. They unfurled a banner across the runway after several members of the group had scaled a 3.5m fence to get in.

The protest, likely to be the first of many, follows the US withdrawal from the intermediate-range nuclear forces (INF) treaty – there are fears that the treaty’s collapse could see a renewed escalation of nuclear arms on European soil..

Mr Cato, MEP for South West England, told the Guardian that the protest would be “a balance of risks and purposes”.

She said: “When you’re talking about the potential end of the world, your own personal safety is put into perspective – and we are talking about weapons that could kill millions of people.”

“Nuclear weapons offer no solution in this era and no rationale for defending the people in the southwest who I represent, one of whom died this year because of a Russian secret forces attack. How are nuclear weapons supposed to help Dawn Sturgess?” she said, referring to the woman police believe was killed by Novichok in Amesbury, Wiltshire last year.

Michèle Rivasi, vice-chair of the Green Party in the European Parliament, said: “Today, 15,000 nuclear weapons are still in circulation in the world and about 20 nukes are still present at the Kleine-Brogel military base. Yet everyone seems to have forgotten their presence and most importantly, their danger.

“However, the bombs stored in Belgium have an adjustable power ranging from 1Kt to 340 Kt, or up to 26 times the power of the bomb Hiroshima.

“A secret bilateral agreement between an EU Member State and the US is an imposed choice of extreme violence imposed on the Belgian and European people. These bilateral agreements leave no room for democratic debate and genuine consideration of citizens. That is why we join activists today in civil disobedience because we believe the public interest is under threat.”