Chechnya funds mosque project as US, EU give Homs aid for food not rebuilding 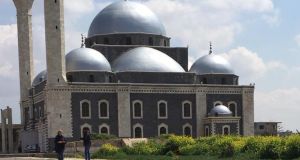 Homs is a city of celebrations. Its residents have survived eight years of war and are determined to overcome deprivations imposed by the punitive peace.

They have received no aid for reconstruction and are confronted by soaring prices, blockaded imports, power cuts and unending hardships.

Nevertheless, the narrow alleyways of the savaged Old City fill with cars vying for right-of-way in streets cleared of rubble while workmen patch war-wounded homes of families who endured or fled during the 2011-2014 battle for the city.

Youngsters in jackets and jeans are painting the walls of the basketball court outside the community centre where, on Sunday, 1,000 people will commemorate the life of beloved “Fr Frans”, murdered on his doorstep by a fighter from al-Qaeda’s Jabhat al-Nusra five years ago, shortly before the siege of the Old City was lifted.

Inside the compound girls wash the floors of rooms and corridors and the flagstones of the courtyard where Fr Frans van der Lugt is buried beneath a simple stone slab bearing a cross, next to a headstone bearing his portrait.

The Dutch Jesuit, who dedicated 50 years of his life to serving the people of Homs, was assassinated three days before his 75th birthday and more than 660 days after the Syrian army surrounded and blockaded the last pocket in Homs city held by jihadis and rebels.

The priest starved and endured consequent ill-health along with hundreds of people in the Old City and appealed for outside help for Orthodox Christians and Muslims. He refused to evacuate after his Catholic flock left.

Maltese Jesuit Fr Michael Zammit – who is in Homs to help with the commemoration – tells The Irish Times there will be a Mass to remember Fr Frans, followed by lunch, and prelates, officials, friends and admirers will attend.

There will be Masses for the late priest on Sunday in St Joseph’s Church in Beirut and in the Netherlands.

Fr Michael says the centre hosting the event had a soup kitchen that one time provided 17,000 meals daily, before it closed in September.

Calling for a “master plan” to aid Syria’s recovery, he points out that the $7 billion (€6.2 billion) pledged by international donors to provide assistance can feed people but cannot be used for reconstruction.

The US and Europe refuse funds for reconstruction until there is a political settlement of which they approve. “During the war, people said things would get better when the bombs stop. It’s not getting better, people want to work,” he says.

In the Old City’s devastated Khaldiya neighbourhood, locals celebrate the return of their precious Khaled Ibn al-Walid mosque, an imposing early 20th-century Ottoman building that replaced a 13th-century mosque housing the tomb of Islam’s most famous general who was converted by the Prophet Muhammad in the seventh century.

A Unesco world heritage site, the mosque has been restored with donations from Chechen president Ramzan Kadyrov. Although only the inside of the mosque has been completed, it was inaugurated in February by Syrian and Chechen clerics. The courtyard and external buildings await salvage.

The interior is white marble, the high dome has been frescoed, stained glass windows replaced, and floor mats laid. The tombs of the general and his son gleam softly in the morning light.

Although formal prayers have not yet begun, local people come to see the miracle wrought in a blasted and burnt historic mosque that had been used as a firing position and arsenal by Jabhat al-Nusra and its allies. The guide says the restoration exactly replicates the Ottoman building.

Local people come to gaze at elegant calligraphy, marvel at the delicately carved marble pulpit and pay their respects.

A shy, hesitant couple wander around the hall, pausing to pray silently. An old man prostrates himself in the direction of Mecca. The mosque is once again a place of worship and peace.

Shopkeepers and customers celebrate the revival of the city’s ancient souq, or market. On the main street, browsers examine clothing, shoes, boots and plastic household items.

The arched roof provides shade from the spring sun as they stroll from shop to shop.

Sitting on a stool outside one of his family’s four shops, Moayyad Tarsha (48), says he began to work here with his father at seven. He sells Aleppo cotton nightdresses, underwear, socks, synthetic fibre dresses and leggings.

“The shops have been in my family for 300 years,” he states proudly. “During the war we moved from house to house, some were destroyed. Now I live in the countryside.”

His family has never given up on Homs.