Netanyahu engaged in a fight for his political life 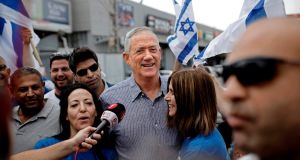 Retired Israeli general Benny Gantz, one of the leaders of the Blue and White (Kahol Lavan) political alliance, campaigning in the Israeli city of Rehovot. Photograph: Thomas Coex/AFP

Israeli prime minister Binyamin Netanyahu is fighting to retain his position in a general election that remains too close to call.

The last polls permitted before Tuesday’s election show the centrist Blue and White party receiving the most seats, between 32-28 in the 120-seat Knesset, compared to 27-26 for Mr Netanyahu’s ruling Likud party.

However, all Israeli governments are coalitions and the polls show that Mr Netanyahu’s right wing-religious bloc will be larger than the centre-left-Arab bloc, although not so large as to make it easy to form a government.

Barring last-minute dramatic swings, the key factor remains how many of the smaller right-wing parties manage to pass the electoral threshold of 3.25 per cent – the equivalent of four seats – required for the minimum Knesset representation. If only two of these parties fail to enter the Knesset, Mr Netanyahu could be in trouble.

After Tuesday’s vote, president Reuven Rivlin will meet with the leaders of all the parties voted into the new Knesset and hear their recommendations for the candidate to head the government. Only after the end of the consultations will Mr Rivlin task either Mr Netanyahu or former top general Benny Gantz, the head of Blue and White, with forming a government.

Another problem for Mr Netanyahu is that the leader of one of the right-wing parties, Moshe Faiglin, the head of Zehut (Identity) – the surprise package of this campaign – insists he is in no one’s pocket and says he will recommend neither Mr Netanyahu nor Mr Gantz for prime minister.

Speaking to Likud activists on Friday, Mr Netanyahu warned that complacency in the final days of the campaign could spell defeat.

“If the people of the right don’t pull themselves together and go as one person to the polling station and vote for Likud, a left-wing government by [Yair] Lapid and [Benny] Gantz will be established here,” he added.

Mr Gantz, at an election rally on Friday, told his supporters they had the power to change everything in Israel.

“On Tuesday there is a historical need and a historic opportunity,” he said.

Two Arab parties – Hadash-Ta’al and Ra’am-Balad– are expected to be represented in the next Knesset and although they will not be invited by the Zionist parties to join a coalition, their support from outside is a key element when doing the election maths.

Unfortunately for the anti-Netanyahu camp, a survey by the Abraham Fund, which promotes Jewish-Arab coexistence, found that only about half of Israeli Arabs, who make up 21 percent of Israel’s population, intend to vote – significantly less than the anticipated Jewish voter turnout.

The co-director of the Abraham Fund, Thabet Abu Rass, warned of the consequences if only half the Arab voters turn up.

“We will wake up next week to a government that continues to promote racist and anti-democratic laws such as the nation-state law that will hurt the Arab citizens and others. I believe that the Arab citizens are facing at an historic crossroads and could constitute the linchpin. Disappointment and apathy must not be allowed to prevail. We must simply go and vote,” he said.