Protests increase in Lebanon as economic and political crisis deepens 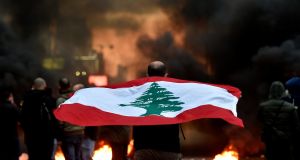 An anti-government protester carries a national flag as other burn tyres during a protest against the power cuts, the high cost of living, the low purchasing power of the Lebanese pound at Bchara Khoury in Beirut, Lebanon. Photograph: Wael Hamzeh/EPA

Renewed popular action has been triggered by the steep fall in the value of the Lebanese lira (pound) from the official rate of 1,500 to 10,000 to the dollar, driving up the prices of imported food and fuel.

As more than half of Lebanese families struggled to put food on the table, the central bank has put forward reductions in subsidies on essential foodstuffs, electricity and fuel.

The World Food Programme has warned that this would have “major inflationary repercussions” and impose “an unbearable strain on households”.

The price of bread would triple while the cost of fuel would rise 4½ times. Financial aid would be provided to most of the population – $50 a month for adults and $25 for minors.

Few Lebanese believe Beirut’s promise of compensation even though the World Bank is set to provide $246 million to support the poorest of the poor as subsidies are phased out. Money for humanitarian purposes has a habit of disappearing into pockets.

Since economic meltdown began in mid-2019, the credibility of the political class has fallen even further than value of the lira. Appointed last October to form a cabinet of nonpartisan experts to deal with the crisis and enact reforms, prime minister Saad Hariri awaits presidential approval of his 18-member line-up.

President Michel Aoun insists that Hariri is not entitled to dictate this process and demands key ministries, prompting other political factions to follow suit. That deadlock persists while poverty grows and hope fades.

Lebanese recall that Aoun, a former army commander, occupied the presidential palace in 1988, formed a military regime in opposition to the legitimate government, and prolonged the country’s bitter civil war (1975-90) for two years until Washington gave the Syrian army permission to oust him.

Despite the president’s record, Hariri has refused to capitulate. Without a cabinet of independent experts, Lebanon will not receive $11 billion in financial aid from foreign donors and $10 billion from the International Monetary Fund needed to rescue the country from collapse .

When the World Bank provided bankrupt Lebanon with $34 million worth of Covid vaccines to inoculate two million people, parliamentarians jumped the queue, violating an agreement for the distribution of jabs beginning with health workers and the elderly and risking a halt to funding of the rollout.

US police officer who killed Daunte Wright may have meant to use taser 01:00
One person dead and police officer wounded in Tennessee high school shooting 00:12
Fatal Minneapolis shooting appears to be ‘accidental discharge’ 22:13
Laschet gets CDU backing in race to succeed Merkel as chancellor 22:04
Boris Johnson gets a haircut as English celebrate easing of restrictions 20:21