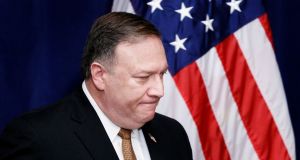 Mike Pompeo: said Iran has taken over from Afghanistan and Pakistan as al-Qaeda’s main “sanctuary for the terror group’s senior leaders as they plan attacks against America and our allies”. Photograph: Justin Lane/EPA

US secretary of state Mike Pompeo’s accusation that Iran has become al-Qaeda’s home base, which he made in a speech on Tuesday, is intended to undermine the incoming administration’s ability to recalibrate relations with Tehran.

Adopting a new tactic in his campaign against Iran, Pompeo alleged in a news conference in Washington that it has taken over from Afghanistan and Pakistan as the main “sanctuary for the terror group’s senior leaders as they plan attacks against America and our allies”.

An arch anti-Iran hawk, Pompeo has offered no proof of the charge. Tehran has denied it.

A Shia theocracy, Iran is ideologically opposed to Sunni extremists. Iranian officers and pro-Iranian militias have fought against al-Qaeda and Islamic State alongside the US-led coalition in Iraq and Syria. Iran has extended protection to Afghanistan’s Shia Hazara minority, a frequent target of Sunni radicals including the Taliban, with whom the Trump administration has been negotiating to end the war in that country.

Because al-Qaeda figures who have sought refuge in Iran have been imprisoned or placed under house arrest, Tehran has been accused of holding them “hostage” to discourage the movement from operating in Iran. Nevertheless, some may be residing in Iran under cover.

The New York Times reported that al-Qaeda’s Abu Mohammed al-Masri, who was charged with involvement in the 1998 bombings of US embassies in Africa, was killed in Iran by Israeli agents last August. Tehran rejected the accusation and said there were no al-Qaeda “terrorists” in the country.

Pompeo’s words echo those of ex-president George W Bush who, in the wake of al-Qaeda’s 2001 attacks on New York and Washington, used the false claim that Iraqi president Saddam Hussein harboured al-Qaeda as justification for the 2003 war on his country. Al-Qaeda entered soon after the US occupation.

Pompeo’s intention is to boost opposition to Biden’s pledge to re-enter the 2015 deal for lifting sanctions on Iran in exchange for dismantling its nuclear programme. This could reduce tensions in the Gulf and lead to negotiations on Iran’s ballistic missile arsenal and regional interventions.

Since outgoing president Donald Trump withdrew from the agreement in 2018, Washington has ratcheted up punitive sanctions, contracting Iran’s economy and deepening poverty. Tehran has retaliated by arming for self-defence and threatening Washington’s Gulf allies if attacked by the US.

In response to Trump’s withdrawal, Iran has breached deal limits by enriching nuclear material from 3.67 to 20 per cent and creating a large stockpile of enriched uranium. Iran is prepared to return to full compliance with the accord once the US does. Biden says the US will do so when Iran does.