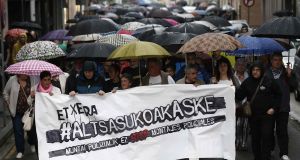 A protest against a judge’s decision to sentence eight defendants to prison, accused of assaulting two Civil Guard officers and their girlfriends in the village of Alsasua, in Navarra, northeastern Spain. Photograph: EPA/Jesus Diges

A court sentence that found a group of young people guilty of carrying out an ideologically motivated attack on two civil guards in northern Spain has sparked anger and fuelled a debate about the country’s justice system.

The incident began in a bar where two civil guards went for a drink with their girlfriends in the early hours of the morning. The court found that after insulting the civil guards, several of the accused attacked them and the assault continued outside on the street. One of the civil guards suffered a broken ankle and the other sustained several injuries. One of the women with them was also injured.

The court concluded that the assault was driven by “radicalisation, animosity and intolerance” towards the security forces as a whole.

However, the court did not accept the prosecutor’s claim that the attack was of a terrorist nature and somehow linked to the ideology of Basque separatist group Eta. Nationalists traditionally claim the Navarre region as part of the greater Basque homeland.

The court rejected the prosecutor’s call for jail sentences of up to 50 years for the youths and found that they “were not even adults when, in 2011 or 2012, [Eta] abandoned the armed struggle”. Eta formally disbanded last month.

Although the terrorism-related charges were not applied, many Alsasua locals and Basque nationalists believe the sentences are disproportionate for what they see as a simple bar brawl.

The Navarre parliament, which is controlled by Basque nationalist parties, approved a motion on Monday describing the high court’s sentence as “exaggerated and out of proportion”. A demonstration against it is being organised for June 16th in Pamplona.

“We’re worried about this country’s justice situation,” said Carlos Couso, of Podemos, which also supported the parliamentary motion. He said the defendants should have been tried in a local Navarre tribunal rather than in the high court.

However, the Navarre Popular Party said that those who had approved the motion were “taking the side of the executioners rather than the victims”.

Although the case is pending an appeal, four of those convicted were arrested in Navarre on Tuesday and taken to Madrid where the high court was due to decide whether to jail them as flight risks.

Those arrested were Julen Goikoechea, Jon Ander Cob and Aratz Urraizola, all sentenced to nine years in prison, and Iñaki Abad, sentenced to 13 years. Three others are already in prison, having been held since soon after the incident. An online group of relatives of those convicted said on Twitter that “they have never shown any intention of fleeing”.