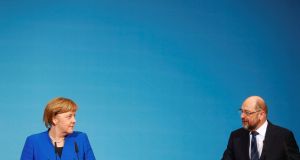 Furious SPD left-wingers, backed by senior state premiers, have launched a roadshow to lobby party delegates to reject the deal when they meet next Sunday for an extraordinary party conference.

SPD leader Martin Schulz has insisted the deal he agreed after an all-night session from Thursday to Friday is the best package possible. With the ink barely dry on the paper, however, spooked SPD officials have floated the idea of renegotiating the deal to ensure its survival.

Many of the SPD’s 430,000 members, who will have the final say on any final coalition deal in a membership vote, are wary of backing a third grand coalition with Dr Merkel’s Christian Democratic Union (CDU).

Two previous such alliances ended with massive electoral losses for the party. After their worst result last September since 1949, many want the party to regroup and rethink its social democratic identity in opposition.

At an SPD regional conference on Saturday in the eastern state of Saxony-Anhalt, delegates rejected Friday’s deal by a narrow majority. A repeat at next Sunday’s extraordinary conference in Berlin would collapse the coalition deal and raise serious doubts about the political futures of both Martin Schulz and Angela Merkel.

Leading the “No GroKo” campaign, an abbreviation of “Grosse Koalition” or grand coalition, is Kevin Kühnert, the combative 28 year-old leader of the SPD’s youth wing.

“Important demands that the SPD made ahead of the election are simply not in the document,” he told the Saturday conference. He singled out apparent plans to cap refugee arrivals, and refugee family reunions as something that “really hurts and doesn’t meet our idea of humanity”.

“Our trust in the CDU/CSU is at a low and so we remain by our no to the GroKo,” he said.

Ms Dreyer said exploratory talks, which ended on Friday, and looming coalition talks were “two different pairs of shoes” and that her party would “push for further successes in coalition talks”.

Mr Michael Müller, SPD mayor of Berlin, said he was “very critical” of the deal, saying his party had fallen short in talks on housing, immigration and integration.

Before Sunday’s extraordinary party conference, Mr Schulz has an exhausting week ahead in a bid to win over doubters and undecideds on Friday’s agreement. On Sunday he went on the attack, accusing GroKo opponents in his own party of misrepresenting the agreement with the CDU/CSU on the emotive refugee question.

It was wrong, he said, to suggest that his party had agreed to a cap of up to 220,000 refugees annually, which was in contravention of Germany’s commitments under international law.

“The CDU/CSU wanted that this [limit] would apply in the future; we rejected that,” he said.

Friday’s preliminary coalition agreement contains an ambiguous sentence that, based on previous experience, “the migration numbers … will not rise beyond the margin of 180,000 to 220,000”.

Over the weekend his prospective centre-right coalition partners insisted they had secured an immigration cap, meaning the SPD leader will have his work cut out convincing his delegates to believe otherwise.

Leading lights in Dr Merkel’s CDU/CSU alliance hit back at SPD hopes to salvage a grand coalition by renegotiating the Friday agreement.

“The exploratory agreement agreed unanimously by all has 28 pages and is practically a coalition agreement,” said Markus Söder, Bavaria’s state premier in waiting and a leading light in the CSU, Dr Merkel’s Bavarian sister party.

His party ally Alexander Dobrindt called on Mr Schulz to “show that the SPD can be a dependable coalition partner and get a grip on the dwarves’ revolt”.

With Germany’s grand coalition – and Angela Merkel’s fourth term – not yet a certainty, Mr Schulz declined to be drawn on Sunday on which cabinet posts his party is aiming for, and if he would be among the new ministers.