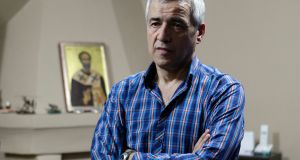 Oliver Ivanovic: one of the chief interlocutors for Nato, United Nations and European Union officials based in Kosovo after the war. Photograph: Andrej Cukic/EPA 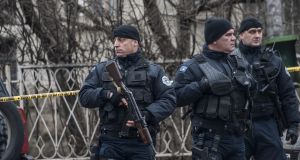 The European Union and United States have called for calm after a leading Kosovo Serb politician was shot dead in what Belgrade called an act of terrorism.

Oliver Ivanovic died on Tuesday morning after being hit by several bullets outside his office in the northern, predominantly Serb part of Mitrovica, which sits across the Ibar river from mostly Kosovar Albanian districts of the divided city.

Mr Ivanovic (64) was a moderate who urged his minority Serb community to defend its interests by participating in elections and state institutions in Kosovo, which next month will mark a decade since it declared independence from Belgrade.

Before that it was run by a United Nations mission following a 1998-9 war between Serbian forces and Kosovar rebels, which killed about 13,000 people and displaced about one million – the vast majority of them Kosovars.

In a 2016 ruling that stunned many of his contacts in the western diplomatic community, Mr Ivanovic was convicted of war crimes, but the verdict was later quashed and a retrial ordered.

“This is a terrorist act as far as the state of Serbia is concerned, and our stance...will be in line with that,” Serbian president Aleksandar Vucic said after an emergency meeting of his national security council.

“The perpetrators of this act will be caught, and if they don’t do it – we will,” Mr Vucic declared, revealing that Belgrade had sent a request to the EU and UN missions in Kosovo to allow Serbian agencies to take part in the murder inquiry.

“Because we are convinced that would also mean discovering the truth about the murder of Oliver Ivanovic. We’ll find the killer or the killers. I am not authorised at the moment to speak about what we have learned...but there are interesting details that point to the possible perpetrators,” Mr Vucic said.

The EU said its foreign policy chief Federica Mogherini had spoken by telephone with Mr Thaci and Mr Vucic and “called on all sides to show calm and restraint and allow the rule of law and justice to take its course”.

The US embassy in Pristina urged Kosovo’s law enforcement agencies “to investigate this incident swiftly and professionally, and bring the perpetrators to justice”.

The murder halted the planned resumption of EU-brokered talks between Serbia and Kosovo in Brussels. They are intended to solve practical problems in Kosovo and build confidence between two states that want to join the bloc.

A tearful Rasim Ljajic, Serbia’s deputy prime minister, said of Mr Ivanovic: “He was the best politician from Kosovo, a moderate politician who did not suit either Serbs or Albanians, precisely because he was moderate and seeking compromises.”

“He was the target of attacks and criticism from all sides... He understood that reality and he wanted to change it in a democratic way, and that’s the main difference between him and the others. Everybody was bothered by him.”