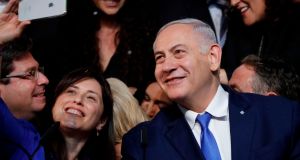 King Bibi has done it again. Trailing in the polls to the centrist Blue and White throughout the campaign, Binyamin Netanyahu managed to siphon enough votes from Israel’s smaller right-wing parties in the days before Tuesday’s election to draw level, winning 35 seats for his Likud party in the 120-seat Knesset – exactly the same as Benny Gantz’s Blue and White.

More significantly, Netanyahu’s natural right-wing/religious bloc enjoys a hefty 10-seat lead over all the other parties combined, meaning that in July he is set to surpass Israel’s founding father statesman, David Ben-Gurion, as the country’s longest-serving prime minister.

“This is a night of tremendous victory,” he told the party faithful at the Likud’s election night gathering in Tel Aviv, after it became clear that some of the TV exit polls indicating a much closer outcome were incorrect.

They weren’t wrong – a political magician, at least. Netanyahu is the pre-eminent Israeli politician of the modern era, who knows exactly which buttons to press, and when, in order to keep winning elections.

Even some of his closest associates had warned Netanyahu that a full-throttle attack on the Likud’s potential coalition parties in the closing days of the campaign could backfire and endanger the bloc. But they were wrong.

The Likud emerged with more seats and a comfortable majority for the bloc.

Love him or loath him, no one can deny that Netanyahu has also established himself as a major player on the world stage, forging close ties with right-wing leaders in European states and Brazil, as well as maintaining a close personal friendship with Vladimir Putin.

His relationship with US president Donald Trump is, of course, the most significant, and has already resulted in a diplomatic windfall for Israel that leaves even Netanyahu’s bitterest opponents in awe.

The Trump administration has withdrawn from the Iran nuclear pact, moved the US embassy to Jerusalem, recognised Israeli sovereignty over the Golan Heights and declared Iran’s Revolutionary Guards as a terrorist organisation on the day before Israelis went to the polls.

Quite an impressive list, considering that Trump hasn’t asked for anything in return – at least for now.