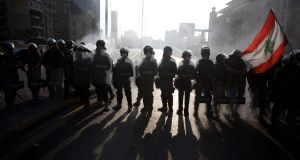 Protesters wave the Lebanese flag in front of riot police in Beirut on April 28th. Photograph: Patrick Baz/AFP via Getty

Spurred by a wave of protests threatening civil conflict, the Lebanese govern- ment on Thursday adopted a plan to rescue the country’s collapsed economy.

Rioters have burned and bombed banks in impoverished northern and southern cities while politicians squabbled, prompting the Arab League to warn that Lebanon is “sliding towards the unknown”.

The riots are hunger games rather than the mainly peaceful political games played by masses who have, since October, protested against mismanagement and corruption and called for the end of Lebanon’s sectarian system of governance.

Fearing a contagion of protests against privation across the region, the League expressed concern that Lebanon’s security forces act responsibly when confronting protesters and urged the government to accelerate the preparation of reforms that “meet the legitimate demands of the Lebanese people”.

Lebanese have returned to the streets since the authorities eased tight restrictions on movement and relaxed closures, reducing to single digits the number of daily coronavirus cases.

But the accelerating economic meltdown has left Lebanon’s poorest without work and income. The army and security forces have responded to marches with beatings, rubber bullets and live fire. When this was met by stones and Molotov cocktails, the military warned against attempts by saboteurs to exploit demonstrations and said it “will never tolerate security violations”.

Former internal security chief Ashraf Rifi, who hails from Tripoli, told L’Orient Le Jour he did not exclude the possibility of infiltrators but said confrontations were predictable.

He said “we are witnessing a real revolution of hunger” mounted by Lebanese who have “lost confidence in the capacity of this government to produce solutions”. It remains to be seen if the government can raise the projected $80 billion (€73 billion) needed to exit the crisis.

Human Rights Watch reported that Lebanon’s army “used excessive, including lethal force”, killing one man during a demonstration in Tripoli and warned that “more than half of Lebanon’s population may be at risk of hunger if the government does not urgently carry out a robust assistance plan”.

This is beyond bankrupt Lebanon’s means unless it receives funding promised by international lenders once credible reforms are initiated.

Instead of supporting efforts of the weak technocratic government to formulate a rescue plan, former prime ministers who benefited from Lebanon’s sectarian system of governance criticised prime minister Hassan Diab, an academic rather than a politician, leaving him without the support of his Sunni community.

In Lebanon, the premier is always a Sunni, the president a Maronite Christian and the parliamentary speaker a Shia. President Michel Aoun and speaker Nabih Berri have done their utmost to stymie reform.

Having become symbols of inequality and deprivation, banks have been repeatedly targeted. As the country plunged into economic chaos, banks halted withdrawals in widely circulated foreign currencies and limited access to Lebanon’s Lira. It has fallen in value from 1,500 to 4,000 to the US dollar, restricting essential imports and sending prices of food and fuel soaring.

Remittances sustaining poor and middle class families have dwindled due to coronavirus hardship among expatriates.

Due to parliament’s failure to vote on emergency aid for the poor, an activist in Tripoli, quoted by al-Jazeera, said the protests were messages warning “each corrupt politician. When we the Lebanese people get hungry, we’re going to remove you one by one. We’re coming for you one by one.”