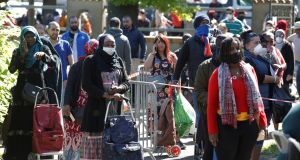 Residents line up during a food distribution by volunteers from the Aclefeu association in Clichy-sous-Bois near Paris. Photograph: Charles Platiau/Reuters

The immigrant banlieues on the outskirts of French cities have been particularly hard hit by the coronavirus pandemic.

“An effective lockdown is nearly impossible in these neighbourhoods,” says Aloys Vimard, a nurse with Médecins Sans Frontières (MSF). The NGO has set up diagnostic centres in the densely populated quarters of north Marseilles.

The lockdown “weighs enormously on people”, Vimard continues. “Before the lockdown, many children ate only one meal a day, at school, because it was free. Now they are hungry. The epidemic is deepening inequality.”

Covid-19 is not nearly as lethal as the Ebola virus that Vimard fought in west Africa, but he sees similarities. “People find any pretext not to be tested. They don’t want to be identified as sick. I know two cases who died without seeing a doctor. We are trying to break the stigma associated with the virus, to encourage people to be tested.”

The immigrant quarters are widely regarded as lawless and explosive. Stanislas Guerini, who heads president Emmanuel Macron’s La République en Marche party, warned of the risk of “violent conflict” between “the France of holiday homes and the France of the housing projects” in an interview with L’Obs magazine.

But though stereotypes about the banlieues are partly true, the picture that emerged from interviews with people living or working in the immigrant quarters of Paris and Marseilles was very different.

Does Vimard fear unrest in north Marseilles? “On the contrary. I hear people saying that whether you are rich or poor, we are all threatened by the virus. I hear no bitterness, no messages of hate or violence.”

If anything, the banlieues seem to be pulling together to a degree not seen in richer areas. Moufid Saleh, the son of immigrants from the mainly African-Arab Comoro Islands in the Indian Ocean, was born and raised in north Marseilles. He speaks warmly of Selim Hadiji, a doctor of Tunisian origin who is organising the fight against Covid-19 in his district.

Before the lockdown, Saleh was a volunteer coach in the Football Club Loisirs Malpassé, which enjoys the support of the professional Olympique de Marseille team. Football is his life, and Saleh misses it desperately. But he and other youths from his group have volunteered to greet patients at the MSF diagnostic tents.

Saleh’s action is all the more courageous because the Comorian community has suffered badly from Covid-19, following large community parties on March 7th and 14th. He knows entire families who were infected. “Of course I’m scared,” Saleh says. “Everybody is. What motivates me is seeing the doctors and nurses.”

Youth volunteers in Marseilles and Seine-Saint-Denis distribute food packages to needy families. “At 8pm, everybody applauds from their windows in Seine-Saint-Denis, exactly like they do in the rest of France,” says Nadir Dendoune, a freelance writer, film-maker and journalist.

“We applaud as much or more than anyone else,” Dendoune continues. “Because who is cleaning the streets? Who works in the nursing homes? All the caregivers and rubbish collectors, everybody taking care of the elderly, they live in the banlieues. All of us have a brother, a cousin, a buddy or a neighbour who gets up early to go to work.”

Dendoune is spending the lockdown with his 84-year-old mother, Messaouda. He helps her keep in touch with family in France and Algeria via computer and smartphone.

“She hasn’t gone out in 32 days. Even if she acts like the strong lady, she is afraid. She washes everything twice a day with bleach. Doors. Doorknobs. She tells me she has known real poverty, that she’s been through worse. Like a lot of people her age, she’s fatalistic. She says it’s God’s will.”

Dendoune’s cousin Aziz died of Covid-19. So did the father of his close friend Hassan. The north African Arab community has been struck with what Dendoune calls triple grief. “We can’t be with our loved ones when they die. We can’t give them proper funerals. A lot of them dreamed of being buried in the home country. Hassan’s father wanted to be buried in Morocco. That’s impossible at the moment.”

I know we are demonised by the media. We have a bad image. But here you can ask anything of anyone, any time

Dendoune mentions a video of an incident that occurred near his apartment in the early hours of April 26th. An Egyptian who was pursued by police dived into the Seine and was fished out. “An Arab like that doesn’t know how to swim,” one policeman can be heard telling another, using a racist slur for a north African Arab. “They sink. You should have tied a weight to his foot.”

“Racism has no place in the police of our republic,” interior minister Christophe Castaner said. The two policemen were suspended.

An earlier incident, on the night of April 18th, sparked four nights of violence, including an arson attack on a school, in banlieues around Paris. A motorcyclist had been critically injured when plain-clothes police suddenly opened a car door in front of him.

Each time violence flares, France holds its breath in the fear of widespread rioting like that seen in the past.

Véronique Roy lives in Sevran, north of Saint-Denis. Two weeks ago, youths torched a car in the centre of Sevran’s park, which remains open because it provides access to the RER commuter train. “We called police several times because there were youths doing motorcycle rodeos on the Lidl parking lot near our house. One night they took down the basketball hoops in the park and burned them. We called the police but they are overwhelmed.”

The price of cannabis and cocaine have risen dramatically, because supply routes from Morocco and Spain have been cut off, according to the anti-drug authority Ofast.

Though neither has any link to the drug trade, Dendoune and Roy understand that dealers have substantial stocks and use the internet to market drugs and arrange home deliveries.

“The clientele used to come from Paris to buy drugs in Sevran,” Roy says. “Around the RER station, not far from the police commissariat. The youths are still there, waiting in cars for customers, or sitting on the low walls around the park. They don’t try to hide.”

Inhabitants seem to be finding a new appreciation for their banlieues under lockdown, despite its grittiness.

The majority of Sevran’s residents are Muslims. Close to 20 radicalised youths joined Islamic State in Syria, including Roy’s son Quentin, a convert. He was killed there in 2016.

“I used to curse the banlieue because I thought for a long time that if we had lived elsewhere, maybe it wouldn’t have happened,” Roy says. But now she finds a kind of comfort in living in the house where Quentin grew up, enjoying the garden and distant views of Paris. “The banlieue is full of contrasts. It has beauty and ugliness, good and bad,” she says.

Each time he has left north Marseilles, Saleh says he has missed it. “I know we are demonised by the media. We have a bad image. But here you can ask anything of anyone, any time. When police hurt someone, like the youth on the motorcycle, the banlieue reacts. Maybe they shouldn’t, but it is out of solidarity, and they can’t take that away from us.”

Irish abroad: Are you emerging from lockdown?