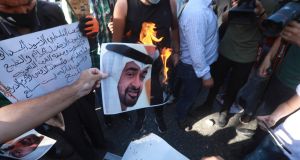 Mr Rivlin extended the invitation in a letter in Arabic, expressing the hope that normalisation will “help build and strengthen trust between us and the regional nations, a trust that will advance understanding, march the region forward, bring economic prosperity and supply stability for those living in the Middle East”.

Although a formal ceremony establishing diplomatic ties is only expected to take place at the White House in October, the two countries are already taking steps towards normalisation.

On Sunday direct telephone links were established and on Monday prime minister Binyamin Netanyahu confirmed that talks are under way for direct flights to the UAE overflying Saudi airspace, as Israel strives to end its regional isolation.

“It is a short flight of three hours, like to Rome, but it will greatly change Israeli aviation and the economy, with a great number of tourists on both sides and a great number of investments,” said Mr Netanyahu.

He said Emiratis are interested in “massive investment” in Israeli technology, and that free trade zones in the Emirates will allow for inexpensive goods to be imported into Israel.

Mr Netanyahu said he expects more Arab countries to normalise their ties with Israel and that the process will eventually also drive peace with the Palestinians.

Support for deal in Israel

Mr Netanyahu’s decision to end plans to annex parts of the occupied West Bank in return for ties with the UAE was welcomed by Israelis. According to a poll 76.7 per cent back the deal with the United Arab Emirates over annexation, while only 16.5 per cent preferred annexation.

The Palestinian leadership have accused Abu Dhabi of abandoning the traditional Arab position that normalisation could only come after the establishment of a Palestinian state.

The grand mufti of Jerusalem and the Palestinian Authority, Sheikh Mohammed Hussein, issued a religious ruling forbidding citizens of the United Arab Emirates from worshiping in al-Aqsa mosque in Jerusalem’s old city, if they visit the site in the wake of the agreement with Israel.

The mufti told a Turkish news agency that only people who enter the mosque through “the gates of Palestinian legitimacy” would be able to worship there, and not people who normalise relations with Israel.