Few good options for Russia as it weighs up Belarus protests

August 14th, 2020: Tens of thousands of people have taken to the streets in Minsk, Belarus demanding that Lukashenko step down, joined by workers at some of the state-owned industrial plants that are the centrepiece of his Soviet-style economic model. Video: Reuters 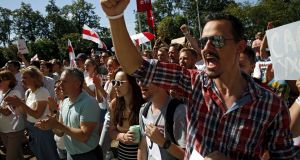 Tens of thousands protesting against an ageing president; workers at state-run factories cheering for the opposition; police officers and soldiers tossing away their uniforms: Belarus president Alexander Lukashenko was living through Vladimir Putin’s worst nightmare when he called his Russian counterpart for crisis talks this weekend.

That the two longtime strongman leaders of neighbouring states would discuss the mass protests against Lukashenko’s 26-year rule was predictable. What Putin might do about it is not.

Russia has long considered post-Soviet Belarus a client state between it and the EU, and Minsk relies heavily on financial aid and subsidies from Moscow. Putin has in recent years sought to press ahead with a decades-old plan to deeper integrate the two countries.

But the protests have thrust the Kremlin into a position where it has few good options, from propping up a discredited regime to bowing to the kind of mass protests that Putin has long sought to suppress at home.

Lukashenko’s summary of their conversations was direct. Putin, he said, had promised, under the terms of the integration agreement between the two countries, to provide “at our request, comprehensive [milittary] assistance to ensure the security of Belarus” if threatened by external forces.

The Kremlin was less explicit. “The Russian side reaffirmed its readiness to render the necessary assistance to resolve the challenges facing Belarus,” it said.

Some western analysts who have long claimed that Putin could repeat his 2008 invasion of Georgia or 2014 invasion of Ukraine in another country, pointed to the statements as an indication that another Russian military deployment could be imminent. But most Kremlin watchers predict the Russian president will remain on the sidelines, while privately pressuring Lukashenko to find some way of defusing the crisis.

The Kremlin’s statements contain “a lot about friendship between peoples, but not a word about support for the current Belarusian president”, noted Artyom Shraibman, a Minsk-based political commentator. “The Kremlin has taken a wait-and-see attitude.”

The anti-Lukashenko protests, which began eight days ago after the long-serving president claimed a dubious election victory, have been fuelled by a strong pro-independence message, meaning any move by Moscow to prop him up would likely meet strong local opposition. However, at the same time, the Kremlin is loath to see his fall precipitate the country’s shift towards the West.

Analysts say a compromise deal with the opposition that leaves a weakened Lukashenko and a mollified populace is Moscow’s preferred outcome, despite how unlikely that may appear, given his brutal response to the protests so far.

“Putin sees this as Lukashenko’s internal affair,” said Tatiana Stanovaya, founder of R. Politik, a Russian political risk consultancy. “If it was about Lukashenko versus the West, then it would be a very different story, and the Kremlin would speak differently.”

“It is a dangerous situation, any protests are a challenge for Russia as well,” she added. “But right now they believe it is manageable and a consequence of bad decisions by Lukashenko.”

While the two leaders have long been allies, if not close friends, their relationship has frayed over the past year. Lukashenko has irritated the Kremlin by appearing to drag his heels on integration. In recent weeks he has detained Russian mercenaries and accused Moscow of helping his rivals.

When Russia’s military intervened in Ukraine it followed protests that called for Kiev to align itself with the EU instead of Moscow, prompting Putin to worry about Nato expansion in a critical neighbour.

In contrast, Putin chose not to directly intervene amid mass protests in 2018 against the longstanding leader of Armenia, another former Soviet state. After the demonstrations toppled the government, the new administration retained its foreign policy alignment with Moscow.

“In Belarus, the entire population is viewed as friendly [to Russia], so the loss of an allied ruler is not such a disastrous turn of events,” wrote Alexander Baunov, senior fellow at the Carnegie Moscow Center, in a recent analysis. “This is why the Belarusian protests against their own authorities . . . are not seen in Russia as anti-Russian or hostile.”

But any Russian intervention on behalf of Lukashenko would risk changing that, analysts said. Military action would also find far less support among ordinary Russians than the invasion and annexation of Crimea in 2014, which had widespread approval and saw Putin’s popularity ratings spike to a record 89 per cent.

Just 22 per cent of Russians believe Lukashenko’s electoral victory was genuine, according to a poll last week by the Russian state-owned VCIOM, while 89 per cent believe the events in the country are important for Russia.

“[The Kremlin] is worried that he could lose control,” said Stanovaya, who said Moscow’s dilemma was to give Lukashenko enough support for him to subdue the protests, while also building ties with a future administration to replace him. “The challenge for Putin is to find a successor who will follow the pro-Russian path, or else the only other option is a pro-western leader.” – Copyright The Financial Times Limited 2020