Islamic State fighters remain a threat after defeat of ‘caliphate’ 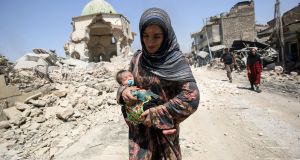 An Iraqi woman, carrying an infant, walks by the destroyed al-Nuri Mosque as she flees from the Old City of Mosul on July 5, 2017. Photograph: Ahmad Al-Rubaye/AFP/Getty

The defeat of the Islamic State’s self-proclaimed caliphate in Syria and Iraq has led to the smuggling of fighters into neighbouring countries from where those who escape arrest can fan out across the world.

Many have already turned up in Libya and infiltrated Egypt’s lawless North Sinai province. Early this month, Egyptian president Abdel Fatah al-Sisi said Islamic State (Isis) fighters were not only battling Cairo’s security forces in North Sinai, the site of last Friday’s massacre of 305 people at a mosque, but also in the western desert.

Sisi said it was “natural” for these fighters to seek refuge in Libya, where fundamentalist militias control pockets of territory and travel from there to Egypt and elsewhere. “This is a threat not just faced by us, but also by Europe, ” he stated.

Jihadis in North Sinai are said to number in the low thousands; some are foreigners. Egypt has said it captured a “foreign” fighter who took part with local militants in an attack that killed 16 police officers in October.

Some 20 vehicles transporting fighters, weapons and munitions were intercepted and destroyed by the Egyptian army early this month near the Libyan border. Egyptians and other fighters receive training and arms in Libya and spread across the region and into sub-Saharan Africa. From Libya, jihadis can also make their way to Europe along with legitimate refugees.

Over the past six months, fighters with Isis and their families have crossed from Syria into Turkey across their shared border. While scores have, reportedly, been arrested, unknown numbers have transited Turkey en route to Europe, travelling along well-established smugglers’ routes despite Ankara’s belated efforts to roll them up.

These routes were created between 2011 and 2015 when thousands of fighters were permitted to transit through Turkey into Syria, where Ankara sought to oust the government of President Bashar al-Assad.

According to a report last month by the US-based Soufan Centre, some 5,600 foreign fighters have gone home from Syria and Iraq with 33 countries reporting their arrival over the past two years. Data seized in Islamic State centres have identified 19,000 of 40,000 foreign recruits from 110 countries.

A small but significant majority remains unidentified and at large and, perhaps, a greater threat than those whose identities are known.

These figures are worrying because the majority of Isis fighters who have not repatriated is far larger than those returning home. Turkey is the only state where the number of returned fighters is larger than those who have not gone home. The Soufan report points out that some dispersed veterans are still “committed to the form of violent jihad that al-Qaeda and [Islamic State] have popularised.”

The Soufan report says, “States have not found a way to address the problem of the returnees. Most are imprisoned, or disappear from view.”

There is also the issue of returning women and children, many of whom have been radicalised. The report argues that Isis remains a threat precisely “because it has been so successful in attracting foreign recruits”, including in areas where the group does not have a territorial base.

Many foreign recruits have joined in reaction to “poor governance and social stagnation” as well as “discrimination and injustice”. Al-Qaeda also relies on these factors to secure recruits, boosting the number of angry young jihadis across the world.