Chelsea Manning to be released from prison 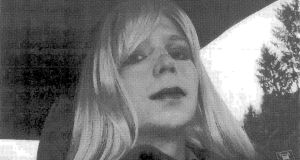 An undated handout image of Chelsea Manning. File photograph: US Army via The New York Times

US president Barack Obama yesterday largely commuted the remaining prison sentence of Chelsea Manning, the army intelligence analyst convicted of an enormous 2010 leak that revealed American military and diplomatic activities across the world, disrupted the administration, and made WikiLeaks famous.

The decision by Mr Obama rescued Ms Manning, who twice tried to commit suicide last year, from an uncertain future as a transgender woman incarcerated at the male military prison at Fort Leavenworth, Kansas.

She has been jailed for nearly seven years, and her 35-year sentence was by far the longest punishment ever imposed in the US for a leak conviction.

Now, under the terms of Mr Obama’s commutation announced by the White House yesterday, Ms Manning is set to be freed in five months, on May 17th of this year, rather than in 2045.

The commutation also relieved the US department of defence of the difficult responsibility of her incarceration as she pushes for treatment for her gender dysphoria – including sex reassignment surgery – that the military has no experience providing.

In recent days, the White House had signalled that Mr Obama was seriously considering granting Ms Manning’s commutation application, in contrast to a pardon application submitted on behalf of the other large-scale leaker of the era, Edward Snowden, the former intelligence contractor who disclosed archives of top secret surveillance files and is living as a fugitive in Russia.

Ms Manning was still known as Bradley Manning when she deployed with her unit to Iraq in late 2009, working as a low-level intelligence analyst.

She copied hundreds of thousands of military incident logs from the Afghanistan and Iraq wars. The files she copied also included about 250,000 diplomatic cables from US embassies around the world showing sensitive deals and conversations, intelligence assessments of Guantánamo detainees, and a video of an American helicopter attack in Baghdad in which two Reuters journalists were killed.

She decided to make all these files public, as she wrote at the time, in the hope that they would incite “worldwide discussion, debates, and reforms.”

WikiLeaks disclosed them – working with traditional news organisations including the New York Times – bringing notoriety to the group and its founder, Julian Assange.

The disclosures set off a frantic scramble as Obama administration officials sought to minimise any potential harm, including getting to safety some foreigners in dangerous countries. Prosecutors, however, presented no evidence that anyone was killed because of the leaks.

At her court martial, Ms Manning confessed in detail to her actions and apologised, saying she did not intend to put anyone at risk and noting that she was “dealing with a lot of issues”.

Ms Manning confessed and pleaded guilty to a lesser version of those charges without any deal to cap her sentence. But prosecutors pressed forward with a trial and won convictions on the more serious versions of those charges.

In her commutation application, Ms Manning said she had not imagined that she would be sentenced to the “extreme” term of 35 years.

“I take full and complete responsibility for my decision to disclose these materials to the public,” she wrote. “I have never made any excuses for what I did. I pleaded guilty without the protection of a plea agreement because I believed the military justice system would understand my motivation for the disclosure and sentence me fairly. I was wrong.”

After her sentencing, Ms Manning announced that she was transgender and changed her name to Chelsea.