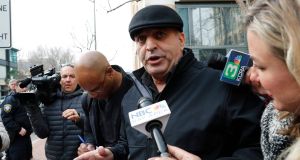 The wife of the gunman who killed 49 people at a gay nightclub in Orlando, Florida, appeared in court on Tuesday, accused of committing a crime by assisting her husband ahead of the deadliest mass shooting in modern US history.

Noor Salman (30) was not present for the June 2016 attack. But she faces up to life in prison if convicted of aiding and abetting husband Omar Mateen’s attempt to provide material support to a terrorist organisation, federal prosecutors said.

She also is charged with obstructing justice for lying to authorities investigating the massacre, according to prosecutors.

The first person charged by US authorities in connection with the shooting, Ms Salman did not enter a plea at her initial court appearance in Oakland, California. Dressed in a yellow t-shirt and gray sweatpants, she spoke only to acknowledge she understood the proceedings.

Ms Salman was arrested on Monday in California, where she was living with her mother in the San Francisco area, according to her uncle, Al Salman, who denied she played a role in the attack.

“She had no idea,” he told reporters outside the court. “I know that justice will prevail, and she is going to show that she is innocent.”

Mr Salman said his niece, a US citizen and the daughter of parents who immigrated from the West Bank in 1985, was physically abused by Mateen.

Mateen was killed in a shootout with police after he took hostages during a three-hour standoff in the Pulse nightclub. He wounded dozens more in the shooting, which intensified fears about attacks by Americans inspired by Islamic State.

His wife’s indictment, unsealed on Tuesday, was returned last week by a federal grand jury in the US Middle District of Florida, which includes Orlando.

She is set to appear in court in California again on Wednesday. But US prosecutors expect Ms Salman to be transferred to Florida to face the charges, said William Daniels, a local justice department spokesman.

The indictment accuses her of criminal activity beginning as early as April, several months before the massacre, but does not detail how she is suspected of aiding and abetting Mateen.

Mateen (29) pledged allegiance to the leader of Islamic State during the rampage. He had twice been investigated by the FBI for possible connections with militant Islamist groups.

US authorities have said Mateen, who lived in Fort Pierce, Florida, with Ms Salman and their young son, was self-radicalised and acted alone without assistance or orders from abroad.