Iran warns it will increase nuclear enrichment within days 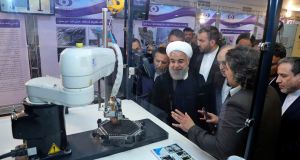 A file photograph provided by the Iranian President’s Office shows President Hassan Rouhani of Iran during a ceremony to mark “National Nuclear Day,” in Tehran in April 2018.

Iran’s president has warned European partners in its faltering nuclear deal that Tehran will increase its enrichment of uranium to “any amount that we want”, beginning on Sunday.

The move puts pressure on Europe to offer a way around intense US sanctions targeting the country.

The comments by president Hassan Rouhani come as tensions remain high between Tehran and the US over the deal, which President Donald Trump pulled America from more than a year ago.

Authorities on Monday acknowledged that Iran had broken a limit placed on its stockpile of low-enriched uranium.

An increasing stockpile and higher enrichment shrinks the estimated one-year window Iran would need to produce enough material for a nuclear bomb, something Tehran denies it wants but the nuclear deal sought to prevent.

The US has rushed an aircraft carrier, B-52 bombers and F-22 fighters to the region and Iran recently shot down a US military surveillance drone.

Speaking at a cabinet meeting in Tehran, Mr Rouhani’s comments seemed to signal that Europe has yet to offer anything to alleviate the pain of the renewed US sanctions targeting its oil industry and senior officials.

Iran’s nuclear deal bars it from enriching uranium above 3.67 per cent, which is enough for nuclear power plants but far below the 90 per cent needed for weapon-grade levels.

On Wednesday, Iran marked the shooting down by the US Navy of an Iranian passenger jet in 1988, a mistake that killed 290 people.

Relatives of those killed threw flowers into the Strait of Hormuz in mourning.

Iranian state television aired footage of mourners in the strait, as armed Iranian Revolutionary Guard fast boats patrolled around them.

The downing of Iran Air flight 655 remains one of the moments the Iranian government points to in its decades-long distrust of America. – AP