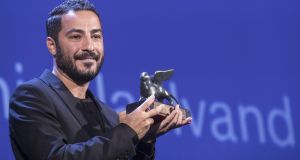 In the days after the Islamic republic admitted accidentally shooting down a Ukrainian passenger jet, killing 176 people, one of Iran’s best-known film stars, Navid Mohammadzadeh, posted a clip from the internationally acclaimed Iranian crime drama Sheeple on Instagram.

“Why did you beat me up ... Because I’m not of your blood? You will see that I’m not going to leave this doomed place,” his character tells his stepfather. “I’ll stay here to blacken your life. I’ll stay here to achieve my rights. This place belongs to me. All of it.”

Over the past few days, the clip has since been viewed by more than three million people. In a country where hardliners have clamped down on pro-democracy and reformist figures, celebrities and athletes have become the public voice of the protests, articulating growing unease with the leadership of the Islamic republic.

“I feel choked by the regime. Somebody has to do something. Who better than celebrities?” said Mona, a personal trainer. “Nobody hears us.”

“At least, they are here for us to express compassion ... Instead of this regime who show no regret of what they have done,” said Arezou, whose cousin died in the plane crash and did not want her real name published. Some celebrities attended funerals of the victims, she said, adding: “No words in literature can describe the loss of my best friend and cousin.”

Mohammadzadeh’s words echoed the defiance of protesters who took to the streets once news emerged of the military’s responsibility for the accident whose victims included about two dozen graduates from Iran’s most prestigious universities.

Days earlier, the streets had been full of mourners grieving the assassination by the US of military commander Qassem Suleimani. But now protesters accused clerical and military leaders of betrayal by killing civilians and lying about it. “Don’t label me a ‘seditionist’! You, the oppressor, are the sedition!” university students shouted. “You fight; we fight back!”

Mohammadzadeh is not the only leading Iranian to articulate frustration with the country’s leaders. Gelare Jabbari, a television presenter, said in an Instagram post that she later removed: “Forgive me for 13 years of lying to you in Iran television.”

The Iranian Alliance of Motion Picture Guilds called on its members to reject invitations to appear on state television. Renowned singers cancelled their concerts in Tehran and other cities. Others have withdrawn from theatre, cinema, music and visual arts Fajr festivals in February, held annually to mark the anniversary of the 1979 revolution.

The day after Iran acknowledged the cause of the crash, the national volleyball team secured a place at the 2020 Olympic Games in Tokyo. But Saeid Marouf, team captain, said “there is no energy to celebrate a victory we dreamt of for years”.

“I wish this was the last episode of a show of deception, hypocrisy and lack of wisdom of these inefficient [officials] ... in these darkest nights ... to be kind to each other. We have no other refuge and shelter than each other.”

Some athletes, annoyed that Iranian authorities want them to wear hijabs and not compete against Israel, have voiced their discontent by quitting Iran. Kimia Alizadeh, a 21-year-old Iranian taekwondo athlete and an Olympic medallist, announced – following Iran’s statement on the aircraft – that she had left for the Netherlands.

“I am one of millions of suppressed women ... We are all instruments ... for their political machinations,” she said in her statement. “Dear Iranian mourners! I did not want to go up a ladder built on corruption and lies ... I decided to take the pain of living away from home ... which was more difficult than winning the Olympic medal.”

Since the 1979 Islamic revolution, millions have emigrated to the west, numbers spiking every time there is a new crisis. Emigration rose after US president Donald Trump pulled the US out of the nuclear deal in 2018 and imposed tough sanctions. Over the past year, Iranian applications for visas to countries such as Canada and Germany have risen, western diplomats in Tehran said.

Sima, a student of business management in the northern city of Babol – another hotspot for the latest anti-regime protests – said she was “so extremely sad and angry” about the plane crash. “Things have gone beyond my tolerance,” she said. “Those killed on the plane were our country’s talents. I can imagine what a long way they had gone to reach that place. I see no future for myself in this country.”

Hossein Raghfar, an economist, said even if the riots died down, more Iranians might yet voice their discontent by leaving. “Long lines in front of foreign embassies and brain drain are amongst the biggest riots happening now,” he said.

Still there are many who back Mohammadzadeh’s stance and want to stay. “We have to stay in Iran and demand our rights and push for reforms,” said Shideh, a veterinary student at Tehran university, the centre of last weekend’s protests. “Now that public anger has reached a boiling point, people are no longer scared of the costs of protests. It is time to be together once again.” – Copyright The Financial Times Limited 2020