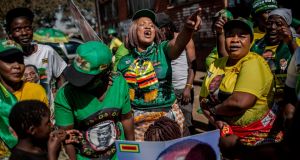 Supporters celebrate after Zimbabwe’s president Emmerson Mnangagwa was declared the winner in the country’s landmark election, in the Harare suburb of Mbare on Friday. Photograph: Luis Tato/AFP/Getty Images

Zimbabwe’s opposition alliance vowed on Friday to legally challenge the disputed election results that saw the ruling Zanu-PF party hold on to power, calling them “fraudulent, illegal, and illegitimate”.

It was responding after the Zimbabwe Electoral Commission announced on Thursday night that Zanu-PF’s candidate for the presidency, the incumbent Emmerson Mnangagwa, had overcome his main rival, Nelson Chamisa, by a big enough margin to avoid a second round run-off.

The commission said Mr Mnangagwa (75) had received 50.8 per cent of the 4.8 million votes cast in the July 30th ballot, while Mr Chamisa (40) of the Movement for Democratic Change (MDC) Alliance, secured 44.3 per cent.

Mr Mnangagwa said on Twitter he was “humbled” to have won. “Though we may have been divided at the polls, we are united in our dreams. This is a new beginning,” he said.

However, in a press conference on Friday afternoon Mr Chamisa said the tallies his officers had returned from the near-11,000 polling stations nationwide showed his alliance of opposition parties was the real election winner.

“We won this election and we are ready to form the next government,” Mr Chamisa said, adding the he would show in the days ahead how the vote as manipulated.

The scenes today at the Bronte Hotel have no place in our society and we are urgently investigating the matter to understand exactly what happened. Over the past nine months we have protected freedom of speech, of assembly and the right to criticise the government. (1/2)

The young lawyer, who recently became a pastor, said the MDC Alliance would use all legal avenues available to it to try to overturn the election outcome. “We are going to challenge a number of electoral results,” he said. “We have reports of where irregularities were done. There is video evidence that exposes that ballot boxes were not sealed”.

His press conference was initially interrupted by riot police, but then allowed to resume. Mr Mnangagwa later condemned the police’s actions, saying they had “no place in our society”.

Mr Mnangagwa held a press conference of his own, in which he appeared to extend Mr Chamisa an olive branch, saying: “You have a crucial role to play in Zimbabwe’s present and in its unfolding future.”

Despite vote rigging claims and the deadly election-related protests that erupted in Harare on Wednesday undermining the poll, a number of regional leaders endorsed Mr Mnangagwa’s win.

On Wednesday the electoral commission released its parliamentary election results, which showed that Zanu-PF had won 144 of the 210 seats in the lower house, while the MDC Alliance got 64 seats. The remaining two seats were won by smaller parties.

The release of those results led to violent clashes between angry opposition supporters – who claimed the vote had been rigged – and security forces that left six people dead and dozens injured. During the street battles in Harare’s central business district the army used live ammunition on the protesters.

International observer groups have yet to release their full assessment of the poll, but election monitoring teams from the West have expressed serious concerns about its credibility in their preliminary findings.

The election on Monday was the first in Zimbabwe that did not involve former president Robert Mugabe, who was ousted last year by Zanu-PF after a military takeover.

The day before Monday’s poll the 94-year-old former dictator sensationally revealed he would no longer vote for the party he had led for four decades, saying it had “tormented” him since he had resigned.