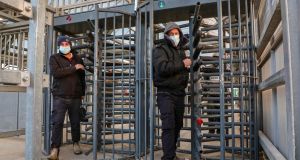 More than 120,000 Palestinian labourers who work in Israel or in West Bank settlements will receive the Moderna vaccine in the coming days.

Palestinian day labourers will be offered the vaccine as they return home following their work day in Israel. Palestinians who work in settlements will be vaccinated at a number of Israeli-run West Bank industrial zones.

The vaccines will be administered by Israeli medical personnel.

Israel has been criticised by human rights groups for not extending its vaccination drive to the West Bank and Gaza, territories that Israel captured in the 1967 Six-Day War.

However, Israeli officials claim that under the Oslo peace accords, the Palestinian health ministry is responsible for vaccinating people in Gaza and those parts of the West Bank where it has limited self-rule.

Ran Goldstein, the executive director of Physicians for Human Rights-Israel, welcomed the move as an important first step.

“This is a vital and necessary step, and better late than never. Israel has a moral and legal obligation to vaccinate the Palestinian population in its entirety, and not only the labourers who come into contact with Israelis.”

While Israel’s impressive vaccine rollout is continuing apace with more than half the population already having received their first Pfizer jab, the West Bank and Gaza lag far behind.

Israel has delivered only 2,000 doses of a promised 5,000 to the Palestinian Authority.

Only 32,000 Palestinians have so far been vaccinated out of a total population of 5.2 million.

At Friday’s meeting of the United Nations Security Council to discuss the Israeli-Palestinian conflict, a number of states, including China and India, promised to provide vaccines for Palestinians.

Last week the EU pledged to provide €20 million for the purchase of vaccines for Palestinians under the World Health Organisation’s Covax programme– enough to inoculate 20 per cent of the Palestinian population. The initial batches are set to arrive this month.

Israel’s decision coincided with a surge in coronavirus cases across the West Bank, forcing the Palestinian Authority to introduce a partial lockdown for the next 12 days, closing schools and banning travel.

Israel has also agreed to supply coronavirus vaccines to the multinational force of peacekeepers stationed in the Sinai peninsula, following a request from the US, even though plans to send 100,000 vaccines to other friendly countries were put on hold while the legality of the move was being examined.