Iran nuclear deal hangs in balance as US calls for rebuke 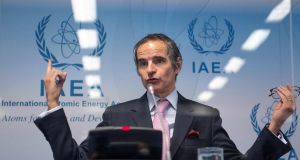 Director general of the International Atomic Energy Agency Rafael Grossi: “The inspection work of the agency should not be put on the negotiating table as a bargaining chip.” Photograph: Joe Klamar

The fate of the Iran nuclear deal is hanging by a thread this week as the board of governors of the International Atomic Energy Agency (IAEA) debates a US call for Tehran to be rebuked for reducing compliance.

Despite Monday’s stern warnings from IAEA chief Rafael Grossi not to imperil agency monitoring of Iranian nuclear sites, Germany, France and Britain have urged the 35-member board to issue a resolution chastising Tehran.

Iran and Russia have said this would complicate efforts to revive the 2015 deal, under which Iran accepted curbs to its nuclear activities in exchange for an easing of sanctions.

“The inspection work of the agency should not be put on the negotiating table as a bargaining chip,” Mr Grossi said.

Ahead of the IAEA meeting, Iran’s vice-president and nuclear chief Ali Akbar Salehi said that if the agency’s board of governors adopted a resolution against Iran, “we will show an appropriate reaction”.

The landmark nuclear deal could collapse if Iran revokes a temporary fix reached on February 21st with the IAEA that preserves 70 per cent of the agency’s monitoring activities, while suspending snap inspections.

This was the latest step taken by Iran, which has enriched uranium above permitted limits, accumulated a stockpile of such material, and used banned advanced centrifuges for enrichment in response to the 2018 US abandonment of the agreement and imposition of punitive sanctions.

The Biden administration has submitted a complaint about Iran’s breaches and called for an explanation from Iran on how uranium particles were discovered at old, undeclared sites. Mr Grossi reported to the board that there has been no progress on the latter issue but Tehran brands the US move destructive.

Iran has also rejected the proposed informal meeting with the US and European signatories of the deal until the US lifts unilateral sanctions. On February 1st, Iran’s foreign minister, Javad Zarif, asked EU foreign affairs chief Josep Borrell to create a mechanism enabling both sides to return simultaneously to compliance.

Instead, Germany, France and Britain called for a gathering of all seven signatories, including Iran, Russia, China and the US, to discuss how to proceed.

Iranian foreign ministry spokesman Saeed Khatibzadeh said that “considering the recent actions and statements by the United States and three European powers, Iran does not consider this the time to hold an informal meeting with these countries”.

Iran’s refusal followed US air raids in eastern Syria on pro-Iranian militias in retaliation for recent rocket attacks on Iraqi bases hosting US forces and Baghdad’s fortified Green Zone, where the US embassy is located.

Mounting strikes in Iraq would increase pressure on prime minister Mustafa Kadhimi from powerful Shia militia commanders and politicians to order US forces to withdraw completely from the country.