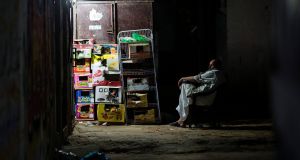 A Palestinian sits outside his shop on Tuesday this week during the few hours of mains electricity the residents of the Gaza Strip enjoy every day. Photograph: Mahmud Hams/AFP/Getty Images 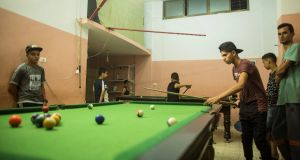 Palestinian youths play pool on Tuesday this week during the few hours of mains electricity the residents of the Gaza Strip enjoy every day. Photograph: Mahmud Hams/AFP/Getty Images

The UN warns conditions in Gaza are deteriorating more rapidly than forecast and the narrow coastal strip has reached the point of being unlivable three years earlier than predicted.

UN co-ordinator for humanitarian aid Robert Piper says that “Gaza continues to de-develop in front of our eyes. From healthcare, to unemployment, to energy, to access to water, across all of these fields, Gaza’s 2 million people are seeing faster and faster decline in their living conditions.”

Gaza’s severe isolation and deterioration began with the Hamas takeover a decade ago, prompting Israeli warfare, siege and blockade. In 2013, Egypt closed its border with Gaza and destroyed the commercial tunnels which provided the strip with goods, food, fuel and medicine.

Gaza’s collapse has been accelerated recently by policies adopted by Palestinian president Mahmoud Abbas and the West Bank-based government.

Abbas has forced into early retirement 6,145 civil servants who had served with the Fatah administration ousted from Gaza by Hamas in June 2007. After Fatah’s eviction, Abbas ordered its employees to stay at home while receiving their salaries, which contributed to Gaza’s increasingly fragile economy. In April, however, he cut their salaries by 30 per cent.

The Palestinian Authority, led by Abbas, has also reduced financial support to families of Palestinians imprisoned by Israel and of “martyrs” killed by Israeli soldiers and settlers.

Abbas has refused referrals for ailing Palestinians to leave Gaza for medical treatment in East Jerusalem, the West Bank, Israel or abroad. He has slashed fuel allocations for the strip and cut by 40 per cent payments to Israel for the supply of electricity to Gaza.

Blackouts have reduced power to four hours a day for a majority of Gazans, making it difficult for families to preserve food during the sweltering summer. Factories have been compelled to close and Gaza’s sewage treatment plant has shut down, resulting in the pouring of raw sewage into the Mediterranean and the closing of beaches where youths had swum during the day and families camped at night to escape the heat. Pollution from Gaza has forced Israel to close its southern beaches.

Farmers lack electricity for irrigation pumps, limiting fresh produce available to Gazans - 80 per cent of whom are already food-insecure and depend on international aid for sustenance. Hospital operating rooms have shut down and health services have been dramatically reduced.

The Palestinian Authority’s aims are to exert pressure on Hamas through the population into relinquishing control over Gaza, dissolving Hamas’s de facto government, allowing the return of the Fatah-dominated PA administration, forming a consensus government and drawing up a roadmap for Palestinian elections.

The Palestinian Centre for Human Rights, an NGO based in Gaza City, calls the PA’s campaign “inhumane” and “unlawful” and accused the authority of deepening the division between Gaza and the West Bank.

Hamas has responded to the challenge by forming an alliance with Fatah’s former strongman in Gaza, Mohamed Dahlan, who has been exiled from the Palestinian territories since 2011 and has presented himself as a possible successor to Abbas, now 82.

Dahlan mounted the failed coup against Hamas instigated by Egypt and the US a decade ago, which led to Fatah’s expulsion from Gaza and sharpened the rift with the PA.

Although detested by most Gazans for his failure to crack down on corruption, kidnappings and hijackings during his time as security chief, Dahlan has reportedly reached a deal with Hamas for his return. This arrangement is said to have been approved by Egypt and Abu Dhabi.

To spite Cairo and Abu Dhabi for their blockade of Qatar, the Qatari government has pledged fresh financial aid to Gaza, a move which could boost Hamas at a time it is threatened by Dahlan and his backers as well as Abbas.