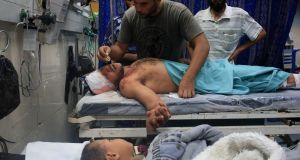 A Palestinian father and son holding hands at al-Shifa hospital in Gaza after they were wounded in an Israeli air strike in October. Photograph: Mohammed Abed/AFP/Getty Images

Salem Buhaisi has arrived to the emergency ward at Shifa hospital in scrubs every day for seven years, despite cuts to his salary that make it nearly impossible for him to provide for his wife and three young children.

The 33-year-old is a nurse in Gaza’s largest public hospital, Al-Shifa, close to the isolated strip’s popular seafront, bustling with families even in crisp winter months.

He is among medical staff in Gaza who for years have received 40 per cent of their salary, sometimes monthly, sometimes every 40 days. To provide for his young family, he tells The Irish Times, he borrows money from his extended family to supplement his $310 (€280) monthly income.

But Buhaisi, who is good-humoured about the political rift plunging him and his colleagues into financial uncertainty, doesn’t believe industrial action is the solution. “We are responsible,” he says, motioning to the other doctors and nurses in the emergency ward at Shifa, “We can’t let people die just because we want money.”

“So many times friends and family have told me ‘don’t go to work’, ‘don’t go to the hospital’,” Buhaisi adds, “but I don’t believe in strikes. I’m here to provide medical service.”

Shifa hospital staff are on the blunt end of a political standoff between the Palestinian Authority in the West Bank and the Hamas government in Gaza. After Hamas won a surprise majority in 2006 elections, a brief but bloody conflict erupted between the factions, with Hamas wresting control of the Gaza strip from rivals Fatah.

While Hamas filled the vacuum by hiring its own civil servants, it has buckled under the cost, and struggles to pay the roughly $18 million (€16.5 million) monthly wage bill, a figure tallied by a Hamas government spokesman.

Despite intermittent and failed efforts – most recently in June 2014 – to restore relations, the factions have yet to reconcile. Both governments continue to hold the other responsible for the salary crisis.

Buhaisi, who does not see any political solution on the horizon, doubts he will ever receive the back pay he says authorities in Gaza have promised. “Both the Hamas and Palestinian Authority are to blame,” he says, “and it’s the people who are the victims.”

Emergency specialist Dr Radwan Dallol was employed in the public sector before Hamas’s takeover of the isolated coastal enclave. He still receives a doctor’s allotted monthly salary, which starts at $960 (€875), paid by the Palestinian Authority based in Ramallah, the de facto capital of the West Bank.

“For the guys who keep showing up on less than half salary, it’s like humanitarian or charity work,” says Dallol.

When hospital cleaning staff, who earn just $200 (€180)monthly, went on strike shortly after Israel and Hamas ceased hostilities in August 2014, surgeries were delayed while medical refuse piled up in the wards. Though cleaners’ salaries had been frozen for five months, their strike was abandoned shortly after it began, when concerns for hospital conditions increased.

The emergency ward where Dallol and Buhaisi work is subject to frequent power cuts. Newly-made beds are dotted with residual blood stains. Gauze, antiseptic, and basic medical necessities are in short supply, says Dallol, adding that his team often run out of latex gloves, forcing them to treat patients with their bare hands.

Thirty-three truckloads of medical supplies have entered Gaza through Israeli-administered border crossings since June 2015, according to figures collected by the United Nations. But these supplies fail to meet the demands of Gaza’s 1.8 million population, of which 1.4 million, including refugees, face restricted access to basic healthcare, according to the UN.

Mahmoud Daher, head of the World Health Organisation’s Gaza office, tells The Irish Times that Gaza hospitals lack 32 per cent of the “essential stock list” of medication and 38 per cent of basic supplies.

“The lack of drugs and basic medical consumables is related to the lack of financial resources at the ministry of health,” he explains, while, “the [Israeli military] blockade affects the availability of equipment and supplies categorised as ‘dual- use’, items such as X-ray, MRI, CAT machines and electronic devices.”

Israel’s co-ordination for the government activities in the territories (Cogat), which oversees the passage of goods and people between Gaza and Israel, restricts entry of “dual-use” goods, items that have been designated for civilian use but may be utilised in military situations.

Shifa’s lack of resources is a source of frustration for patients. Doctors are unfazed when Hamas police toting AK- 47s enter the emergency ward, accompanying a prisoner who requires medical attention.

Rather, medical staff have been petitioning for extra security at the hospital to act as an intermediary with agitated patients, frustrated by the severe lack of resources.

“Patients are often angry, even aggressive towards medical staff,” Buhaisi says. “They blame the doctors for the lack of resources and for the lack of staff. We are always complaining to management about this. We say we need guards. They say there is no budget.”

Even before Israel’s 2014 war – which it called Operation Protective Edge – with militant groups in Gaza, during which the strip’s only power station was damaged by Israeli war planes, Gaza was operating on less that half of the power the population required.

The electricity crisis has since deepened. In mid-2015, supplies met only 56 per cent of Gaza’s needs, according to the UN. Scheduled cuts leave the population without electricity for up to 16 hours daily.

Despite an ongoing Canadian-led initiative to bring solar technology to Gaza hospitals, the power shortage has hit hospitals, most visibly in the daily power cuts.

“Lights in the ER stop for about two minutes everyday at 2pm,” Dallol says, “while the main electricity supply cuts, and the hospital generator kicks in. The cuts have implications for intubated patients or patients on dialysis. All life here depends on electricity.”

The military’s response, Netanyahu added, would be, “much stronger than in Operation Protective Edge”, which claimed the lives of more than 2,000 Gazans and displaced more than 100,000.

As rhetoric between Hamas and Israel intensifies, health professionals fear another war and hospitals’ ability to cope with the toll on civilians. “Gaza is not at all prepared for any natural disaster or complex situation,” WHO Gaza chief Daher estimates, “and war is a complex situation. With current levels of preparedness, the impact would be disastrous.”